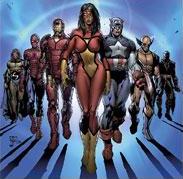 Seeking to destroy his half-brother Thor, Loki, the Norse god of mischief, had tricked Hulk into going on a rampage in order to lure Thor into the open. Rick Jones, the Hulk's sidekick, sent out a distress signal to the Fantastic Four for help, but Loki diverted the signal so that Thor's alter ego, Dr. Donald Blake, would hear it instead. Inadvertently, the Wasp, Ant-Man and Iron Man also received the transmission. The heroes joined up to take on the Hulk until Thor discovered Loki's trick and ended the battle.

Seeing how well they worked together, the heroes banded together and formed The Avengers. Iron Man, through his alternate identity as rich industrialist Tony Stark, funded the team, provided them with high-tech equipment, and donated his Manhattan mansion to serve as their headquarters. Edwin Jarvis, Stark's butler, stayed on as the mansion's principle servant and quickly became a valued friend, confidant and advisor to the group's many incarnations. Stark sough out security clearance from the federal government, but their original liaison, Agent Murch, as well as the general populace weren't entirely sure of what to make of the group. It wasn't until they found and thawed out Captain America that they earned their trust and respect.

Soon after, all the original remembers retired for various personal reasons, leaving Cap to lead a team of former criminals; Quicksilver, Scarlet Witch and Hawkeye. Eventually, however, each of the originals would return for various intervals of service. A fluid membership became a constant theme with the Avengers, many heroes enjoying both full and honorary membership. Despite that, through rigorous training, each incarnation of the team came together and managed to stop some of the most massive threats to the planet.

After Murch, the team had several government liaisons. Amongst them was Henry Peter Gyrich, who was paranoid and imposed many restrictions on the team; such as membership reduction and adding members like Falcon and Ms. Marvel. After he was reassigned, Raymond Sikorsky came in and the team found him easier to deal with until he ultimately betrayed them by leading a government conspiracy against the Vision. Lifelong fan Duane Freeman was next, but ultimately he was killed by the time-traveling conqueror Kang. Gyrich returned, more humble than when he left, and served admirably as the Avengers liaison to the United Nations.

The group's swelling membership led to the creation of the West Coast Avengers led first by veteran Hawkeye. Rosters would include his wife Mockingbird, War Machine, Thing, Moon Knight, USAgent, Firebird, Human Torch, Living Lightning, Spider-Woman (Carpenter), Machine Man and Darkhawk. Subsequent leaders, however, allowed the deterioration of the team and it was forced to disband after the loss of personnel and resources.

When the threat of Onslaught arose, the heroes seemingly sacrificed themselves in order to destroy him. In reality, they were transported to an alternate Earth, dubbed later on as Counter Earth, created by the powerful mind of Franklin Richards to save their lives. Things progressed there as they did on the real Earth, and the heroes had no recollection of their true pasts. Eventually, they returned and continued strong. With a massive reduction in roster to more manageable levels, the team added New Warriors Justice and Firestar.

Eventually, the Avengers were destroyed from within when an insane Scarlet Witch turned against them. Hawkeye, Vision, Jack of Hearts and Ant-Man (Lang) were apparently slain and Avengers Mansion was destroyed with Stark's funds insufficient to rebuild all caused the remaining members to disband for the greater good. Feeling the world needed the Avengers after a massive super villain breakout as the prison known as the Raft, Captain America and Iron Man decided to reform the team in secret without all the charters, press and government connections. These New Avengers are Spider-Man, Luke Cage, the original Spider-Woman, and eventually the Sentry, all instrumental during the fight at the Raft. Daredevil, also present, declined membership due to his own legal and identity problems. Wolverine was recruited during the team's first mission into the Savage Land and later by Echo after a mission had taken them to Japan. Once again, Stark had donated the top floors of his Stark Tower in midtown, staffed as always by Jarvis, with most of the team residing.

Despite Cap's "full champion license" granted to him by the government allowing him to form any team he deemed necessary for missions, there are those in government positions that worry about a repeat of the Scarlet Witch catastrophe and plan to either keep a close, secretive eye on the team or destroy it. Only time will tell which it will eventually be.

At the present, the events of Civil War and conflicting personal philosphies about the Superhero Registration act have split the team.