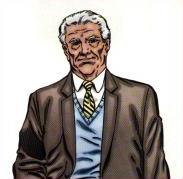 Surely any true Spidey fan knows all about Uncle Ben. But just for those who are completely new to Spidey, here's the little that is known about the man who raised Peter Parker, and helped form the man that is now Spider-Man.

The first we learned about Ben is when he was a carnival barker back in the bad old days of the depression. Of course, that doesn't fit with the 2004 time-frame, but back in the 60's, it made perfect sense, and let's leave things at that. He was a confident and out-going man, but wise and honest - a truly decent human being. He had one sibling, a younger brother named Richard.

Ben met and fell in love with the lovely May Reilly. May came from a slightly more refined and middle-class background, compared perhaps to Ben's more earthy upbringing. May was beautiful, and slightly aloof. Furthermore, May's attentions were distracted by the enigmatic Johnny Jerome, a young man who always had plenty of cash despite the hard times.

Jerome was eventually revealed as a gangster, and the more steady and trustworthy Ben Parker won his beloved May. They dated, as young men and women of the day did, although their relationship was hampered by the continual presence of young Richard Parker, who Ben was forced to care for. It was the resentment of Richard's presence which persuaded May and Ben to take the decision to live a life unhindered by children of their own.

After their marriage, Ben sought more stable employment in the textile industry, while his brother married a young woman named Mary, who like himself was in the U.S. secret service. Richard and Mary would frequently go overseas, and leave their only child Peter in the care of Ben and May. After one mission, Richard and Mary did not return, turning Ben and May into somewhat reluctant parents.

Peter soon showed himself to be a brilliant young boy, though somewhat sensitive. Ben struggled to find ways to boost the confidence of the young Peter Parker. The two would watch baseball games, supporting the Cubs. Ben provided Peter with a box of Golden Age super-hero comics, found in the attic from his own youth. Peter had few friends at school, and Ben was more than Peter's caregiver - he became the young boy's closest confidant.

Ben was very protective of Peter, and surprising for a gentle, elderly man, even used force to help his nephew. Peter became friends with Charlie Weiderman in high school, a teen even more un-popular than he was. However, Charlie often provoked the trouble with the other teens. One day, he was chased to the Parker home by a group of bullies and Ben intervened. Ben told them that if they wanted Charley, they would have to go through him. They accepted the offer, and quickly regretted it. Ben had been in the army, and wasn't a man to be underestimated. Just because he protected Charley didn't mean that he liked him. As soon as the bullies were gone, he told the boy that he wasn't welcome at the house or with Peter. Charley came back many years later, much to Peter's regret.

One fateful night, a few days after the events which saw the creation of Spider- Man, a burglar entered the Parker household and killed Ben Parker. As we all know, that same burglar had formerly robbed the TV station at which Spider-Man had appeared. The young web-slinger had the chance to halt the criminal, but had declined through selfishness. Pursuing the criminal and realizing the connection, Peter was devastated that his earlier inaction had caused the death of his beloved Uncle.

Following Ben's death, he then appeared in a number of flashbacks, which sadly added little more to his history. We have encountered a couple of characters from Ben's former life, but again they have added little other than to confirm that Ben was a good and decent man. Ben has managed one post-humous appearance, in Amazing Spider-Man #500, where Doctor Strange brought his spirit back for five minutes so that Peter and Ben could share a few moments after all these years. In those few minutes, Peter begged for Ben's forgiveness, but his Uncle assured him there was nothing to forgive. Ben also impressed upon Peter the importance of following whatever path would bring him happiness.

As a side-note, the details of Ben's death have been told on several occasions, but with a great deal of conflict. It is not at all clear whether Ben was inside or outside when he was killed. Various versions of the story have had him either returning home late and discovering the Burglar, or alternatively going downstairs upon hearing a noise. There is also conflicting evidence as to whether May saw Ben killed or not. This might be an area worth a little investigation at some stage, gathering the different stories together and attempting to form a consensus.

One editor's theory: Ben was a generous man, and gave a loan to a co-worker at the textile factory so he could go to college. The college refused to let Colm Mulligan enter, because he was too late with payments. Ben gave him the money anyway. A few hours later, Ben was dead. (This was shown in Spider-Man Unlimited #10, volume one.) In Amazing Spider-Man #38, volume 2, May told Peter that she and Ben had argued before he was shot. He went out for a walk, and was shot as he arrived home. May blamed herself, saying that if they hadn't argued, he would been at home, safe. She didn't say what the argument was over, but the Parkers were never rich. Maybe she didnt like that he gave Mr Mulligan the money. Just an idea.