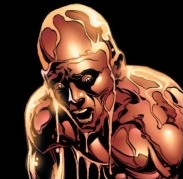 Peter Parker was the biggest nerd at Midtown High School, until Charlie Weiderman showed up. Unlike Peter, Charlie came from an abusive family and was even more awkward. In gym, even the nonathletic Parker was able to easily score against him while playing volleyball. Peter tried to be his friend, and he visited Charlie in the hospital after he tried out a "super soldier" serum on himself. Still, he got no sympathy from the creeps at school. They waited to beat him up. Every. Day.

One day, as three guys were trying to hustle him for five dollars, Charlie tried to pull a knife on them, but Peter made him drop it. The coach saw the knife and Peter said it was his Uncle Ben's, lying to protect Charlie. Peter managed to not get expelled because he was such a quiet student and because Uncle Ben lied and backed up his story.

Charlie was still getting targeted by the jocks, but he had a crush on one of the cheerleaders. A jock set him up to talk to her, but as soon as he told her she was beautiful, she told him that her boyfriend thought so too. She then kissed the guy that got them talking, who then tore off Charlie's gym pants. Weiderman never forgot that humiliation. He tried to get even by slashing the guy's car tires, but that just got him in more trouble.

He ran to Peter's house for help, but the bullies followed him, and got into a fight with Uncle Ben. After they left, Ben asked Charlie a simple question: Did you slash their tires? He lied, and Ben knew it. He then told Charlie that he was no longer welcome at his home and Peter was to no longer associate with him. Soon after, Charlie's dad got a new job and they moved to a new town. Peter didn't hear from Charlie until years after high school.

Charlie had become a military scientist, and was working on an indestructible metal "suit" that would be applied directly to a soldier's skin. He had run out of research money and needed Peter as a reference to get a grant from Tony Stark. Peter agreed, and Charlie got his grant, but only because he lied and said Peter was part of the research team. Peter was called by Stark's secretary and was shocked to hear that they believed he was working on Charlie's experiment.

He confronted Weiderman, and found that he was making dangerous shortcuts while working on the metal. Peter refused to let his research continue, because if something went wrong, everyone thought he was part of the team. After he left, Charlie rushed production of the metal, which caused an explosion and leveled the building he was in. It also coated him with the indestructible metal.

After the police and firefighters arrived at the scene of the accident, Charlie woke up and, in a panic, killed two of the fire fighters. He ran to Peter's apartment, begging him for help. He demanded that Peter get money so he could do more research to get the metal off of him, but Peter refused, telling him that he wasn't thinking clearly. At that point, Weiderman smashed his wall, telling him that if he didn't help him, he would kill everyone Peter knew.

He ordered Peter to go to the bank and cash a check from Charlie worth all of his money. He would then meet with him at the bank after he cashed the check and would kill Peter and everyone around him if he didn't do as he was told. Peter agreed and immediately told Aunt May and Mary Jane to find a hotel until everything was blown over. Meanwhile, Charlie was watching the news coverage of his story and he saw one of his old bullies talking about him to a reporter. In his increasing delusions, he saw the guy and his beautiful ex- cheerleader wife talk trash about him. He quickly murdered them.

Spider-Man was waiting for Charlie at the bank, and a battle ensued. Much to Spidey's regret, Weiderman was completely emotionally unstable and got stronger as he got angrier. Charlie got away and made a visit to Aunt May's house. He also found Spider-Man at Peter's apartment, which he was burning. Spidey escaped, but collapsed in an alley from smoke inhalation. While he was unconscious, he dreamed that he was back in high school, hearing a lecture about vibranium.

That's where he got his idea to stop Charlie. He made a quick stop to see Tony Stark and then went to find Weiderman. That wasn't hard, he just followed the sirens. He managed to drag him to Stark Industries, and threw him to a highly pressurized atmosphere machine. The high pressure caused the vibranium to solidify, encasing Charlie in his suit. He would live for the rest of his life as a statue, being fed just enough to be alive. Checking on May and MJ, Peter heard the horrible news. While at May's home, Charlie set it on fire. It was burned to the ground.

Rescue came in the form of Tony Stark, who offered to let Peter, Mary Jane and Aunt May live with him at Stark Towers. While this seemed like a dream come true, it soon turned extremely dangerous after Stark decided to become the enforcer of the Superhuman Registration Act. Peter was given little choice but to go along with the Act, as he also unmasked to the public. This out him under constant attack from many of his enemies, such as Chameleon, Doc Ock, Vulture, Francis Klum, Venom, Sandman and Kingpin. Fisk had an especially devastating effect on Peter, when he hired a sniper to shoot May.

Weiderman is supposedly cured of his powers, after being a research subject of Harry Osborn. Osborn was looking to find a cure for his ex-wife's step brother, Mark Raxton, the Molten Man.