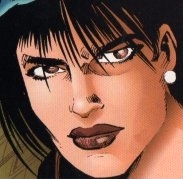 Jessica Carradine was Ben Reilly's girlfriend. Before she and Ben even met, it was clear that she and Spidey had a history together. Going for a walk one night, Jessica saw Ben swing away and she instantly ran for her camera, saying, ""Spider-Man! After all this time...I was beginning to think I'd never get the chance!"

She managed to get a picture of Spider-Man battling the armor suited Armada, and a friend told her that she should sell the picture to the Daily Bugle like that Peter Parker guy. J. Jonah Jameson liked her work and gave her a job. She hoped to get assigned to a developing Spider-Man story, one involving a skeleton found in a smoke stack that wore a tattered Spider-Man costume. She mentioned this to Ben at the Daily Grind coffee bar, where Ben worked as a waiter. Ben barely managed to hide his shock at hearing this news, but was lucky to be sent on an errand by the Grind's owner, Shirley Washington.

Spidey went to the morgue to investigate the skeleton and Jessica planned a surprise house warming party for Ben with Shirley. Meanwhile, Spider-Ben was trying to sneak out of the morgue with the skeleton, when he was confronted by JJJ, who also wanted to look at the remains. Spidey webbed Jonah's eyes and jumped out a window but Jameson had already started screaming that he was going to expose Spider-Man as a murderer. Ben was on his way to hide the bones before he could find a place to analyze them, but he was interrupted by a brawl between the Rhino and the recently revived Kaine. Spidey got caught in the middle and ended up getting a brick wall dropped on top of him.

Arriving back at his apartment, Ben saw Jessica waiting for him with the TV that his friends had chipped in to buy for him. Everyone else had gone home when Ben didn't show up but Jessica stayed and fussed over Ben's bruises. Ben got attached to Jessica very quickly, but he soon began to wonder about her past. It started when he was at her apartment and he say her walls covered with photos of Spider-Man. She insisted that she was just trying to see what pictures worked and which ones didn't.

She got defensive when Ben didn't trust her, which he apologized for. She reminded him that no one has ever trusted her. She had been sent from foster home to foster home for years because her mother died when Jessica was a baby and her father was in prison. He had been jailed for the murder of an old man, whom her father told her had mistaken him for a burglar. They struggled and the old man's gun went off, killing him. When her father got out of prison, he took care of her for a short while before he died. Seeing Jameson accuse Spider-Man of covering up the "murder" of the man whose skeleton was in the smoke stack further convinced Jessica that Spider-Man was a killer.

While Peter and Ben took the skeleton to the Avengers to have it analyzed, Peter took the opportunity to examine a photograph of Jessica and her father, whose face was unclear in the photo. Upon seeing the clearer resolution, Peter instantly recognized Jessica's father as the burglar that killed Uncle Ben. While Ben had no idea what to do with this new bit of information, Jessica was still determined to prove that Spider-Man was a maniac. She got her wish when the Carnage symbiote escaped from Ravencroft Asylum and bonded to Ben, causing him to tear New York apart. Spider-Carnage barely managed to keep from killing Jessica, and they swung away before they did anything more than smash her camera.

Ben avoided Jessica over the next few days, partly because of his being bonded to the Carnage symbiote and partly out of discomfort of knowing about her father. After Jessica caught up to him at the Daily Grind, he managed to get her to tell him more about her father. Jessica believed that Spider-Man planted evidence on her father to frame him for Ben Parker's murder. After he was released from jail, Jessica said that he tried to start a new and honest life but Spider-Man caught him in a warehouse. He beat her father and eventually strangled him to death, and the coroner called the cause of a death a heart attack. But Jessica was sure that she knew the truth: the coroner must have lied to protect Spider-Man.

As they were walking to dinner, a S.W.A.T. van sped past, alerting them to a jewelry store robbery nearby. Ben went to help with the hostages, while Jessica grabbed her camera. After the thieves were caught and the hostages were safe, Spider-Man swung off to an alley way to change back to Ben Reilly. Little did he know, but Jessica had climbed to a nearby rooftop and was watching him with her telescope camera lens. Upon feeling his spider sense buzz, Ben rushed to the spot of the danger and saw a nearly hysterical with rage Jessica. She stormed away, telling him that she never wanted to see him again. Later that night, a calmer Jessica decided that her photo of an unmasked Spidey was the perfect means to revenge.

Meanwhile, a pair of cops arrived at the Daily Grind looking for Ben Reilly, telling Shirley that he was wanted for several arsons against former employers. She didn't believe them, until the coffee shop was torched later that night. Ben's life also deteriorated when his apartment was ransacked, with a message written on the floor: "We know who you are!" Ben went to Jessica's apartment to confront her, thinking that she was behind his problems. Little did he know, but Jessica, while having spent much of her life hating Spider-Man, had decided that she loved Ben Reilly more than she hated Spider-Man. An argument broke out between them, and Spider-Man left, telling Jessica to stay away from him.

Spider-Man later went to see Dr Seward Trainer, whom Peter believed was lying to them as to whom was the real Peter and who was the clone. Ben stood by his friend and went to Dr Trainer to discuss the skeleton found in the smoke stack, but was ambushed by a mercenary team called Cell-12 and their leader, the Jason Macendale Hobgoblin. During the battle, Hobgoblin told Spider-Man that he was the one that burned the Daily Grind, had Peter Parker beat up and Ben's apartment torn apart. Hobgoblin also explained that while he was behind the recent attacks, he was only a pawn in a far larger conspiracy. Dr Seward Trainer then showed up to stop the beating, forcing Ben to admit to himself that his friend was not what he seemed. Ben barely survived the attack and limped back to Peter and Mary Jane's apartment to heal.

Realizing that he had unfairly accused Jessica of ruining his life, he went to her to ask her to forgive him. She told him that she had hated Spider-Man for her entire life and she was tired of hating and she wanted to put the past behind her. They embraced and in a careless moment, Ben asked her if she would burn the pictures of him as Spidey. Jessica, thinking that he had only come to sweet talk her into destroying the evidence of his double life, threw him out.

The last time Jessica appeared, she was defending Ben from a fellow patron of the Daily Grind named Desiree. The Grind was going to be rebuilt from insurance money since the insurance company decided Ben was at fault for the fire. Jessica defended Ben from Desiree, even though she assured her that she and Ben were no longer an item. She was last seen leaving flowers at Uncle Ben's grave, recognizing Spider-Man as a hero.