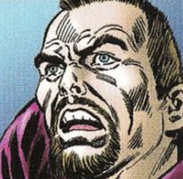 Daniel Berkhart was a cell mate and patsy for the original Mysterio, Quentin Beck. Berkhart had been blacklisted for showing up drunk to his job as a stunt man. Calling Berkhart a "greedy fool," Beck said he had screened all of the other prisoners and picked him as the perfect fall guy. He trained Berkhart in many of the tricks of being Mysterio and then faked his death, even fooling Daniel. When Berkhart was released from prison, he became the second Mysterio and was quickly beaten by Spider-Man. This was just what Beck wanted, as it allowed him to operate without suspicion.

Daniel's first battle against the wall-crawler (Amazing Spider-Man #141) resulted in Spidey injuring his own hands very badly (he wore bandages until Amazing Spider-Man #146.) Berkhart tried to convince Spidey that he was the ghost of Quentin Beck, as Spidey had heard of Beck's "death" at the prison. Former enemies seemed to appear at random to attack Spider-Man, initially fooling him. After Peter realized he was dealing with Mysterio, he found a small device on his chest that was broadcasting a signal that caused the illusions. He followed the signal to its source and beat Mysterio. It was also found that J. Jonah Jameson had been paying Berkhart to defeat Spider-Man. After he was arrested, Berkhart threatened Jameson with the possibility of telling the police that they had worked together, making Jameson run to Paris and get held for ransom by Cyclone.

Many years later, Berkhart associated with Maguire Beck, Quentin Beck's cousin. Daniel wore the Mad Jack identity, which he used to torment Jameson with Maguire's assistance. Berkhart and Maguire were trained in Mysterio's arts by Quentin himself, but lacked his skills.

After the original Mysterio died in 1999's Daredevil #7 (vol.2), Daniel kept showing up in the Spider-Books. He joined a new version of the Sinister Six, and later plotted against JJJ, Daredevil, Joe Smith and Spider-Man, in 2001's Spider-Man: The Mysterio Manifesto. When Quentin Beck, his "friend" and former tutor, left him the fishbowl as his legacy, Berkhart extended his revenge from Jameson to Spidey. Maguire, eager to avenge her cousin and have some fun at the same time, took over Mad Jack's costume.

Though Mad Jack was captured, Berkhart was now much more skilled than he had ever been, and managed to elude Spider-Man, fleeing with Mad Jack's cat (also named Maguire). Berkhart is a worthy successor to Quentin Beck. The student has yet to overcome the master, but he's proved himself a dangerous foe to Spidey and whoever has crossed his path. He joined the Sinister Six and successfully captured Senator Ward with the help of Electro.

He recently crossed paths with Spider-Man and Francis Klum, the third Mysterio. Klum had taken over Midtown High School and Berkhart came to challenge his use of the Mysterio identity. They fought and Daniel seemed to get the upper hand, but he was defeated by Spidey.

Daniel appeared briefly after Quentin Beck made his big comeback. (And really, who didn't see that coming?) He and Francis were thugs working for Beck. They all tried to escape Manhattan after Beck impersonated Silvermane and fought Mister Negative for control of the Maggia organization. Quentin escaped but Francis and Daniel were captured.

Berkhart is supposedly dead, killed by Jack O'Lantern VI, who wanted to "clean up the brand."