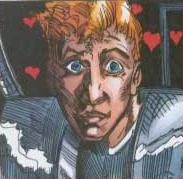 Joe Smith is a "not-overly-bright" wannebe boxer and wrestler who dreams of being champ but is too much of a bumbler to be successful in either sport. In spite of his ineptness and the ridicule he receives from his fellow fighters, Joe does succeed in attracting a manager, Tommy Tomkins, who feels pity for him. Tommy gets Joe a stunt man job as a monster in a cheap TV fantasy film. Joe dresses in a green and orange outfit and smashes props on the set but, when a piece of debris hits an arc light, electricity combines with spilled chemicals and gives Joe a powerful jolt.

When Joe comes to, he is plagued by spots in front of his eyes. He also gains super-human strength and an anger and killer instinct that he lacked as a fighter. When he breaks right through the wall of the TV studio, he encounters Spider-Man and fights him to a standstill. Though Tommy brings him home, Joe is still affected by his accident and decides to go to the gym to get revenge on all of the fighters who laughed at him. Spider-Man again intervenes and the two duke it out until Joe can't see the spots in front of his eyes anymore; his power fading at the same time. Ready to accept responsibility for his rampages, Joe instead discovers that the TV studio is not pressing charges and wants to sign him to a long-term acting contract. Tommy comes along as his manager. Spider-Man, witnessing this turn of events and aware of his own hard luck, can't help but be upset by the unfairness of things.

Although Joe signs to star in a weekly TV series, his first job is as the lead in a low-budget SF flick called "The Alien and the Ozone". The filming goes on at the previously shut down Silver Star Studios, which is being used as a hideout by Quentin Beck, alias Mysterio. When Quentin, in the midst of trying to impress his childhood friend Betsy Schneider, comes upon the movie crew, he appears to kill them all and then ride off with Betsy on a giant flying Sphinx. Joe grabs a hold and tags along for the ride.

Mysterio's mass murder of the movie crew turns out to be an illusion. An impressed Betsy gives Quentin a kiss and comes up with an idea. She is now a freelance writer and would like to write the true story of Mysterio. Hearing this, Quentin feels spurned; used only for making money. He threatens Betsy only to have Joe Smith step in and defend her. But Joe doesn't have his powers anymore and Mysterio easily knocks him off the Sphinx. Plummeting to earth, Joe is rescued by the Amazing Spider-Man.

Mysterio lands his Sphinx and jails Betsy within it when she refuses his offer of marriage. Spidey arrives, still carrying Joe, and takes on Mysterio and his illusions while Joe heads inside the Sphinx to see what he can do to help. He comes upon Betsy and the two fall in love at first sight. When Mysterio triggers a self-destruct of his virtual reality device that will cause devastation for five blocks, Joe stops it by pulling a plug from a socket inside the Sphinx. Later, J. Jonah Jameson gives Joe a ten thousand dollar check for "single-handedly stopping Mysterio and his partner- in-crime Spider-Man". He also hires Betsy to write a series of articles that become her best-selling book "Mysterio and Me".

The expected relationship with Betsy never takes place and Joe ends up back in television, playing the title character in a show called "The Crimson Bat". There he meets a script girl named Liz, falls in love and marries her. The show is cancelled after three seasons and Joe finds himself typecast as a super-hero, unable to get work. With enough invested money to live on, Joe and Liz move into a New York brownstone and, soon after, Liz gives birth to a son; Joe Jr. But Joe Jr. has a birth defect, leaving him severely retarded. Unable to handle this, Liz walks out six months later and Joe raises Joe Jr. by himself. Joe routinely leaves his son at a center for kids with learning disabilities where, one day, Joe Jr. has a sudden convulsion and dies. Grief- stricken and convinced that Joe Jr.'s birth defects came from his own earlier electrical/chemical super-powers, Joe suffers post-traumatic stress syndrome which brings back his strength and killer instinct. He goes on a rampage of denial during which he tries to destroy all the others he blames for Joe Jr.'s fate and is only stopped when Captain America forces him to see that he is really lashing out against himself.

A physical exam discovers a trace of the chemicals that gave him his powers and it is determined that this is treatable with medication. Joe goes on trial where a sympathetic judge lets him off with community service. Joe winds up working at the James Coleman Memorial Institute for the Learning Impaired where he meets and apparently has a relationship with co-worker Julia Trainor. But the neighborhood surrounding the center ends up infested with gangs and vandals. When gang members loot the Learning Center, Joe pulls out his old costume and decides to teach some of them a lesson. Without his powers, however, he is easy prey for the hoods, until members of the neighborhood decide to fight back and save Joe. It is a small "fleeting" victory but it reminds everyone of what they can do if they take a stand.

Eventually, Joe and Betsy reunite and get married. Betsy has made a career of capitalizing on her relationship with Mysterio. When Quentin Beck commits suicide, Betsy takes over all rights to his alter-ego, creating books and action figures of super-heroes wearing Mysterio's fishbowl helmet. But Quentin may not be dead after all as the action figures come to life, apparently under Quentin's influence, kidnapping Betsy and Joe even as Spider- Man and Daredevil are captured by the pumpkin-headed Mad Jack. All three men are immersed in Mad Jack's "Happy Juice" which temporarily steals Spider-Man and Daredevil's powers but temporarily returns Joe's powers to him. In the end, Mad Jack turns out to be Quentin's cousin Maguire Beck, while Quentin is indeed dead, replaced by his previous stand-in: Daniel Berkhart. Impressed by her husband's courage, Betsy decides to give up writing her books about Mysterio and write instead about A Guy Named Joe.