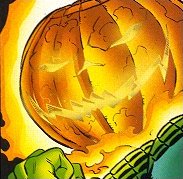 Jack O'Lantern III was Daniel Berkhart (he was also the second Mysterio.) Maguire Beck (cousin to the original Mysterio), provided tech support, and on occasion, wore the costume herself. This makes her the fourth Jack O'Lantern. She and Daniel kept contact via a radio in their helmets. Maguire and Berkhart were both Quentin Beck's students. Maguire assisted Berkhart while he worked for Norman Osborn. Berkhart also wanted revenge on J. Jonah Jameson for a previous betrayal. Maguire's goal was mainly the adrenalin. Having fun was her key motivator.

The fourth Jack O'Lantern's next appearance was in Spider-Man: The Mysterio Manifesto, after the original Mysterio had commited suicide. She had a "new" Mysterio by her side, tormenting Spidey, J.J.J., Daredevil and Just A Guy Named Joe (Joe Smith). The new Mysterio was none other than Berkhart, re- enacting his first super-villain role. Maguire had become the sole Mad Jack. Together, they wanted vengeance over those who they felt had wronged Quentin Beck. (Of course, Berkhart wanted J.J.J. in the mix as well.) Maguire was captured by Spidey and Daredevil, while Berkhart escaped.

Maguire is allegedly dead, killed by Jack O'Lantern VI, who claimed to have killed everyone else who had been called by that name.