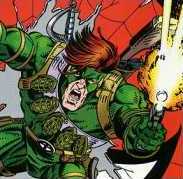 "Where I Live, Terror Dies" - or so says Solo in his campaign against terrorism throughout the world. James Bourne is a one-man army in his endless vigil against Terror in all it's guises. Solo has had a number of cameos in Spider-Man books, as a gun-toting teleporting, sharp-shooting vigilante. Strangely, he never seemed to get top billing along with Spidey, but always ended up with bit parts.

Solo first appeared in Web of Spider-Man #19, in a brief appearance in a story which featured "Humbug". Playing second fiddle to a man who's primary weapon is the recorded sound of the South American Sun-Rasping Beetle is an ignominious start indeed. This blow to the ego was obviously enough to cause him to swap his purple costume for a green one in later appearances.

Solo received his training in the "Omega Strike" anti-terrorist detachment of the NATO alliance forces. He also received the implanted chip which gives him the ability to teleport. He typically carries a selection of handguns, an assault rifle, lots of grenades, and a sword and a few knives for emergencies. He wears a partial mask, and dresses in a military green with lots of pockets.

He has taken on such Spider-Man villains as the Sinister Six (Doctor Octopus, Electro, Vulture, Sandman, Mysterio, Gog and Hobgoblin IV) and teamed with Spidey against the terrorist group Ultimatum. During the Ultimatum incident, he worked with Silver Sable, Paladin and Captain America, who particularly didn't care for the mercenary.

Spidey and Solo crossed paths again some time later, when Peter was looking into the Red Skull's involvement in his parent's disappearance years before. (This was during the "fake parent" plan of Harry Osborn.) Tracking Skull to the Rocky Mountains, he broke into Skull's hideout and found that the information files he was looking for had been taken by Solo. They met later in Alexandria, Virginia, neither really trusting the other but willing to work together. It was quickly obliviously that the information they had gotten in the West was bait for a trap, as they faced Taskmaster and his new students (Death Shield, The Jagged Bow and the Blood Spider). The evil versions of the Avengers were captured and Taskmaster escaped and Solo told Spider-Man that all he learned was that the Red Skull was planning to attack a parade in New York the next day.

They met in Battery Park, with Spider-Man planning to turn Solo over to the police after all was said and done. Peter had learned from Joy Mercado at the Bugle that a Japanese official named Kuroto would be giving a surprise speech at the parade. This was at a time of heightened tensions between the U.S. and Japan, and his death on American soil would make relations worse, possibly bringing terrorist attacks. As soon as Kuroto arrived in New York, Ultimatum terrorists attacked but the heroes stopped them. Solo teleported away before Spider-Man could apprehend him, but before the mercenary could kill a group of disarmed terrorists.

Solo has recently turned up again working with GW Bridge in the new "six pack" team (Anaconda, Domino, Hammer and Constrictor) that was organized in an attempt to stop Cable from becoming too powerful. Solo and Cardiac also took on a rampaging Wolverine, who was under mind control at the time. Solo was quickly defeated by Logan.

During the Civil War, Solo was part of the Anti-Registration forces but were quickly rounded up by Iron Man and his Pro-Registration team. Solo was hired by Bullseye's father to track down his son, but he was blinded when Bullseye threw a shard of glass into his eye. Bourne manages to defeat his adversary anyway by tasering him.