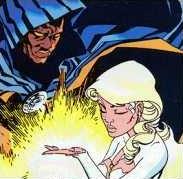 Tyrone and Tandy were in a group of runaways kidnapped by members of Silvermane's gang. They were used as guinea pigs in an experiment to test a new addictive drug. Only Tyrone and Tandy survived; however, the drug released unsuspected latent abilities, turning them into Cloak and Dagger.

Initially they used their powers to track down and attempt to destroy Silvermane and others who dealt in drugs. They made an enemy of the Kingpin, and Fisk's scientists tried to duplicate Cloak's abilities. The result was a terrifying new super-criminal called...The Spot. Their most famous moment was participating in the Maximum Carnage crisis. After Carnage, Shriek, Demogoblin, Doppelganger and Carrion II began a mass riot in Manhattan, the two joined with Spider-Man, Venom, Captain America, the Black Cat and others to end the slaughter. Shriek in particular seemed to recognize Cloak, thinking that she may have encountered him when she was a small time drug dealer. Dagger seemed to be killed during the riot, but she got better by the end.

Later, Tandy persuaded Cloak to use less than extreme violence, with mixed results. Cloak went on to join the Anti-Registration forces during the Superhuman Civil War, caused by the Superhuman Registration Act. His leader was Captain America, who needed Cloak to teleport the whole rebellious forces out of thier hideout after it was invaded by Iron Man and his allies. Cloak pulled it off, but he could only take such a huge number of people so far, eventually dumping them in Times Square. Thats where the final battle of the Civil War took place, which resulted in Cap's surrender.

Tandy and Tyrone later took part in Spider-Island, where the Jackal and the Queen gave many of the citizens of Manhattan spider-powers. They had just been evicted by the city from an abandoned church that they were using as their headquarters, when they were invited to join the Avengers, who took them to the battle in Manhattan. Tandy preferred to not take part in any super heroing at that time, and left the fight to go to a class. Meanwhile, in Chinatown, Mr Negative is consulting a psychic. He had been warned that a super powered individual would kill him, and the seer told him it would be Dagger. Tandy was kidnapped and corrupted by Li, who twisted her with the Dark Force, making her similar to Cloak. Like Cloak, she now hungers for light and began to starve for it. Tyrone begged Li to touch him and change him, and Negative agreed. Now Dagger and Cloak have their powers reversed.

After the Mister Negative events, Cloak was kidnapped by Sabertooth and left dangling from from the top of the Empire State Building. He was saved by Wolverine, who was unaware that his old nemesis had returned to life. Dagger had been taken by Sabertooth and Logan went looking for them both.

The duo was recently assaulted by Spider-Man (Octavius) after they stopped a mugging. Little did they know, but Dagger had been infected by the Carrion virus. (Superior Spider-Man Team Up #1)