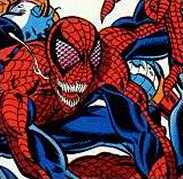 During the epic battle known as "The Infinity War", Adam Warlock's nemesis the Magus created a twisted and evil duplicate of most of Earth's heroes in an effort to finish them off. Spider-Man's double (later known simply as "Doppelganger) first attacked Spider-Man during a three-way battle between him, Hobgoblin IV, and the Demogoblin. Though Hobgoblin appeared to have killed Doppelganger, his body was secretly retrieved by the Demogoblin.

After the Magus was defeated, all the evil doubles were destroyed.... except one. Having establish a psychic link to Demogoblin due to the later's supernatural powers, Doppelganger lived and became a kind of "pet" to Demogoblin.

After a battle, the two were separated, and Doppelganger soon ran into Carnage and Shriek. Planning a huge killing spree, the two added Doppelganger to their ranks, with Shriek becoming a surrogate "mother" for him.

When Carnage found that Shriek had killed some people without his consent, he tried to kill her, and the protective Doppelganger intervened. To teach Shriek a lesson, Carnage killed him.

Whether due to his creation by Adam Warlock or his resurrection by Demogoblin, the Doppleganger survived the murder attempt by his "father." (Granted he never showed up in the nearly 17 years--real time--between his "death" and return.) He reappeared as Shriek and the Carnage symbiote were being transferred to a bio research facility. The creature was seemingly killed in battle between Spider-Man, Iron Man and two Iron Man wannabe's. Later, two scientists at the facility are examining the body discover that Doppelganger is "inorganic and may not have been legally alive to begin with." The creature reanimates soon after and is saved from guards by Shriek, who is happy to be back in business with her "son."

He stayed by Shriek's side like a loyal pet as she drove the citizens of New York insane with her empathy powers and tried to defend her when Dr Nieves (bonded to a new symbiote called Scorn) attacked her. He was slapped aside and went whimpering back to Carnage. After the two of them escaped, they ended up at Mike Bolton's (the man that saved Kasady's life after being brought back from space and harvested the symbiote from him) home for a little "gratitude." Kasady let Doppel have some fun with Bolton, as he made plans to tour America.

Doppel joined Carnage in Doverton, Colorado, where Kasady took over the town. He was attacked by the symbiotically enhanced special forces team and allowed to escape, leading them to Carnage.