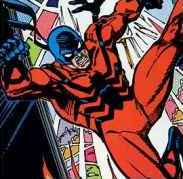 A second man, Captain Luis Alvarez, become his country's new Tarantula in Web of Spider-Man #36. Although he fought at the side of Captain America (John Walker, tricked into helping him), he was as brutal as his predecessor and soon was also on the run from the law. He was killed as part of an initiation ritual for a Jury recruit in Venom: Sinner Take All #4.