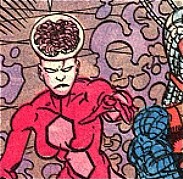 There just isn't a whole lot to say about Mindblast. (Can you tell that this is the last of the four Femme Fatale profiles and I'm running out of ways of saying the same things over and over again?) No origin or background has ever been given. She, along with Knockout, Whiplash, and Bloodlust, is a member of the Femme Fatales. They battled Spider-Man in the service of the Chameleon. In a battle involving Spider-Man, the Black Cat, the Tarantula, the Scorpion, the Chameleon, and the Femmes, Mindblast was defeated at the same moment and by the same method as Knockout. The Black Cat suckered them both into falling on the drugged spikes on the boots of the unconscious Tarantula.

Later, Mindblast and the rest of the Femmes joined Superia's Femizons and fought Captain America and Paladin.

And that's pretty much it.