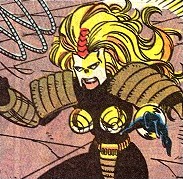 The origin and history of Whiplash are not known. She first appears as a member of Critical Mass's group of evil mutants known as the Band of Baddies. The Baddies kidnap a young extremely powerful mutant girl and hold her father hostage hoping to force her to do their bidding. Spider-Man and Wolverine arrive and engage the group in battle. Whiplash wraps her long metal whips around Spider-Man's midsection but the wall-crawler frees himself by snapping the whips into pieces. Not long after, the powerful mutant girl causes an explosion and all the villains are presumed dead.

But Whiplash and Bloodlust are not dead. They later turn up in the company of two other female super-villains, Knockout and Mindblast, calling themselves the Femme Fatales. They first appear at JFK Airport, where an ambassador from "a newly-freed Baltic country" has requested to meet Spider- Man. By all appearances, the Femmes are there to kidnap the ambassador but are really there to tackle the web-slinger. The battle ends in a stalemate and the Femmes escape. Later, they team up with the Scorpion, Tarantula II, and the Chameleon (who masterminded the attack at the airport) to battle Spider-Man and the Black Cat. Whiplash is defeated by the wall- crawler when he webs her whips to the ground and punches her in the jaw.

Whiplash and the other Femmes later join up with Superia and her huge team of women super-villains dubbed "Femizons". They participate in the battle with Captain America and Paladin and help to defeat the two men. Cap eventually defeats Superia's plan to sterilize all women besides her Femizons but Superia manages to escape on her hidden island of Femizonia. Presumably Whiplash and the others stay there with her.

Unfortunately, Whiplash ventures out into the world again, this time teaming up with Orca, Killer Shrike, and Shockwave. They take on the Heroes For Hire. Whiplash's opponent is White Tiger II and she becomes so unnerved by her opponent's metamorphosis into a real tiger that she is easily defeated.

Later, though, Whiplash can be seen hanging out at one of the "Bar with No Name" super-villain taverns, having herself a brew.

Note: Although she was originally a member of a group of "evil mutants", Whiplash appears to derive her powers entirely from her equipment. She even recoils in shock when the White Tiger proves to be a shape-shifter. "Yer not human. Yer some kind of freak... or a mutie!" she says, clearly implying she is not a mutant herself.