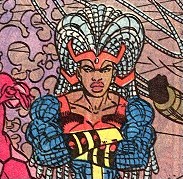 Knockout first appears at JFK airport as the leader of the Femme Fatales. Nothing is known of her background; whether her powers are natural or part of her outfit, how she met and assembled Mindblast, Bloodlust, and Whiplash into a group, or how she met and agreed to work for the Chameleon. She and the Femmes apparently attempt to kidnap an ambassador from "a newly-freed Baltic country" at the airport but their real intent is to take on Spider-Man, perhaps to push him further toward the idea of having his powers removed by a man calling himself "Dr. Turner" who is actually the Chameleon in disguise. Spider-Man does agree to have his powers stripped away but later recovers them in the midst of a battle involving the Black Cat, the Scorpion, the Tarantula, the Chameleon, Knockout and the other Femmes. Knockout is defeated by the Black Cat who uses the spiked and drug-laced boot of an unconscious Tarantula to pierce her body armor and knock her out.

Knockout later appears (with the rest of the Femmes) on the S. S. Superia and the island of Femizonia as one of the many female super-villains who make up Superia's Femizons. She battles and helps to subdue Captain America and Paladin. She also appears with the Femizons (but without the rest of the Femmes) and other super-villains on the island of Boca Caliente, headquarters of the evil scientific group Advanced Idea Mechanics to join in a battle with Captain America again. Since she was not captured, it is assumed that she is currently safe on the island of Femizonia.