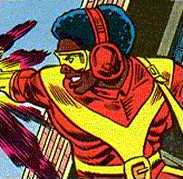 The Rocket Racer first appeared as a happy-go-lucky high-tech crook who would do anything for cash - burglary, armoured car heists, blackmail, you name it. In his flashy red and yellow costume with his jet powered skateboard (with inertial stabilisers, yet) and his rocket shooting gloves, he was as hip as you could get in comics in the late 70's.

A closer examination, however, makes Robert Farrell seem less of a cut-and-dried villian. His early talent for science and technology seemed to indicate a promising future, however financial pressure saw him leave after high-school and join the air force. His mother's illness and hospitalisation pushed Robert, as the oldest of seven siblings to find a faster way to make money.

He developed his skateboard and gloves and set out on a spectacularly short-lived life of crime (Amazing Spider-Man #172). With some help from the Tinkerer to soup-up his equipment, his second attempt brings him eventually to the attention of the courts (Amazing Spider-Man #182 and #183). His bail was paid by a bail-bondsman who forces the Racer eventually to crime once more. Spider-Man and Racer manage to save each other's lives from the bondsman's hired mercenary, the Bounty Hunter, and the repented Robert Farrell is given a merciful sentence by the courts. After serving his short time, Robert was given a full scholarship at ESU, where he currently continues his studies.

Since his rehab, Robert donned the Racer costume multiple times, this time as a do-gooder. He was a member of the Outlaws, that included the also rehabs Prowler and Will O' The Wisp, the hitman with a strong sense of honor Puma, and the shifting Sandman (who was rehabed by then, but decided to be evil once again recently, in a Mackie/Byrne typical twist) all united under the leadership (and payroll) of Silver Sable, or working independently sometimes. Among his heroic deeds, we include when he (with the Outlaws) helped Spidey to clear his name after the Chameleon framed him, when he (also with the Outlaws) helped Spidey against the Avengers, and then helped them all against the evil that originally manipulated them against each other, and when he teamed-up with Spidey to take out Skinhead.

Having been missing from the books for several months (since the Great Game, I think), Robert makes a small appearance in Amazing Spider-Man (Vol. 2) #13, where someone steals his (once again improved) suit, and plans to use it for criminal purposes. Of course, since he was spawned by Mackie, it wasn't a big surprise that they simply never used the Rocket Racer II from that issue onwards. Typical, once again.

In Robert's most recent appearance, in Spider-Man: Tangled Web #5, we have what seems to be another Marvel screw up, as both him and the Gibbon are shown in jail, making fun of the Rhino. The thing is, both Robert and the Gibbon are currently considered rehabilitated, and are heroes in their free time. Continuity goofed up once again. Well, nothing we're not used to already, right?