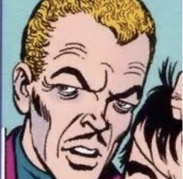 Frederick Foswell was a short, slight, timid reporter for the Daily Bugle. Tired of playing the fool for J. Jonah Jameson, he used his reporter's skills and contacts to join with the Enforcers (Montana, Ox and Fancy Dan) and unite all of the mobs of New York. He wore built-up shoes and a padded jacket to disguise his identity. Even Spider-Man never truly suspected who the Big Man really was. But it was Spider-Man's intervention that resulted in the police discovering Foswell's secret.

Foswell never became the Big Man again. Upon his return from prison, he was rehired by J. Jonah Jameson. Initially suspected by Spider-Man of being either the Green Goblin or the Crime Master, Foswell was actually frequenting underworld hang-outs disguised as the stoolie known as Patch. (He wore a full-head mask of a man with a patch over his left eye.) In his capacity as reporter and stoolie, Foswell figured out the Crime Master's identity and tipped the police, ultimately resulting in the Crime Master's fatal shootout. He also worked with police against a cat burglar and tried to help Spider-Man discover the identity of the Master Planner. He became the Daily Bugle's best reporter. Spidey even began tipping Foswell off to his fights.

Later, Foswell achieved prominence when it was revealed that he was the cellmate of Mendel Stromm in prison and when, as Patch, he was the first one to discover that Peter Parker is Spider-Man. (Unfortunately for him, he also became the first person to fall for the fake conversation between Peter and Spidey, with a web dummy web-slinging away, thereby becoming the first person to believe that Parker and Spider-Man had a working relationship with the news photos.)

In his final appearances, when it seemed that Spider-Man had quit and the Kingpin of crime was reorganizing the underworld, Foswell reverted to his old ways. He first tried to take the Kingpin's place but failed. He settled for being his first lieutenant instead. But, at the end, when the Kingpin's men were trying to kill J. Jonah Jameson, Foswell could not let any harm come to the man who had trusted him after his time in prison and given him a job. Protecting Jameson, Foswell was gunned down by the Kingpin's men... dying a hero.

” Dead No More: The Clone Conspiracy”

Foswell and many other dead criminals and civilians, were returned to life by the Jackal (Ben Reilly.) Reilly was emotionally manipulating Peter by resurrecting anyone whose death he felt responsible for. Reilly promised that the criminals were under control as they were being treated by Ashley Kafka and watched by George Stacy. Reilly offered to clone Ben Parker, which crossed the line for Spider-Man. When he refused to join the Jackal, Reilly ordered the clones to kill him. (The Clone Conspiracy #4)

The Big Man made one other appearance when Janice Foswell, Frederick's daughter took over the role. Janice teamed with the Sandman and Enforcers against Spidey and the Human Torch. She was killed by her fiance, the new Crime Master. No one has worn the garb of the Big Man since. (Marvel Team Up #39 & #40)

Many years after Janice’s death, Frederick Foswell Jr took over as Big Man. He hired Arcade to kidnap JJJ and show him a hologram of his life. This included his wives, his son John Jameson, and his work at the Bugle. After the hologram ended, Jonah and Spider-Man were surrounded by his less proud legacies: the Scorpion, the Human Fly, and Spencer Smythe’s original spider slayer. (Amazing Spider-Man (Vol. 5) #13-#15)