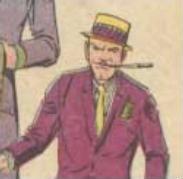 Fancy Dan's origin has never been revealed. He first appears, with Montana and the Ox as a member of the Big Man's Enforcers. Though small, Fancy Dan is a "master of judo" whose "footwork is so fast and dazzling that no one can lay a hand on him". His talents in concert with those of his partners make the Enforcers so formidable that even Spider-Man struggles against them. Eventually, though, the web-slinger and the police manage to smash the Big Man's gang and imprison the Enforcers.

(A later retcon reveals the Enforcers as employees of Norman Osborn before they ever team up with the Big Man. They also work with the Headsman, an Osborn flunkey, post-Big Man, in yet another retcon.)

Soon after, Fancy Dan, Montana, and Ox, leave prison and team up with the Green Goblin. They lure Spidey out to the southwest by pretending to star him in a motion picture. Fancy Dan gets webbed up in a cave for his troubles and the Enforcers are defeated. The Green Goblin, however, escapes.

Later, Fancy Dan and friends team up with the Sandman. They still lose.

In later appearances, Fancy Dan and the Enforcers team up with Big Man II, Crime Master II, the Lightmaster, Hammer Harrison, Snake Marston, Mr. Hyde, and the Kingpin. Unfortunately, they are dealt with more and more as ineffectual laughingstocks that couldn't give Spidey a run for his money these days no matter how hard they tried. In their most recent appearance, the trio stooped so low as to resort to using guns... as if that is the only way they can be impressive. It's enough to break your heart.