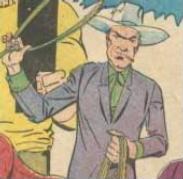 Montana's origin has never been revealed. He first appears as a member of the Enforcers along with Fancy Dan and the Ox, working for the Big Man in his attempt to take over the New York mobs. His specialty is the lasso, which, in his hands, "resembles a living thing, completely obedient to its master's will". Combining their special abilities into an intimidating mix, the Enforcers wage the first of the gang wars in which Spider-Man becomes involved. Thanks to the wall-crawler's interference, the Enforcers are rounded up by the police and the Big Man is discovered to be Daily Bugle reporter Frederick Foswell.

(A later retcon reveals the Enforcers as employees of Norman Osborn before they ever team up with the Big Man. They also work with the Headsman, an Osborn flunky, post-Big Man, in yet another retcon.)

Released from jail after a stint of a few months, Montana and his pals team up with the Green Goblin in order to get revenge on Spider-Man. The plan is to convince Spider-Man that he is acting in a movie with stunt men made up to look like the Enforcers and then... clobber him! It doesn't work. Montana gets webbed up in a cave and the Enforcers get picked up by an Army helicopter. The Goblin, of course, escapes.

Out of jail, Montana and friends team up with the Sandman to capture the Human Torch. Spidey steps in, rescues the Torch and creams the Enforcers again.

Years go by before Montana is seen again. In his next appearance, he allies himself with the Big Man II, the Crime Master II, Fancy Dan, and the Sandman. (Spidey beats him by kicking him in the stomach.) Then he teams with Fancy Dan, Ox III and the Lightmaster. (Spidey beats him by grabbing his lasso and swinging him against the wall.) In his battle with the Dazzler...ahh, who'm I kidding? I didn't read those issues of the Dazzler. He later teams with Hammer Harrison and Snake Marston of the Satan Squad (along with Dan and Ox III, of course) to form the New Enforcers under the aegis of the Arranger. (Spidey beats him by yanking his hat down over his head, tying him up with his own lasso and whacking him against a wall.) He and the New Enforcers get hired by Mr. Hyde to do a number on Daredevil. (The Eel... yes, the Eel... beats him by punching him out.) Most recently, Montana, Fancy Dan, and the original Ox have been hired by the Kingpin and resorted to using guns. (Spidey beats him by kicking him in the head.)

Montana became the right hand man of Wilson Fisk after Kingpin was released from prison. He didnt stay in that position for long, as he was killed during a fight between Spider-Man and Phil Urich, the Hobgoblin. The Hobgoblin's sonic laugh set off a material called reverbium, which had been stolen and was being held in Fisk's building. The vibrations caused the building to collapse, sending Montana to his death and allowing Hobgoblin to take his place in the Kingpin's organization.