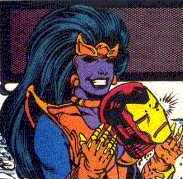 Well, what many of you are asking right about now, is "Who?"

I don't blame you. Terraxia showed up in the "Infinity Gauntlet", a cosmic proportion saga from 1991, written by Jim Starlin, which featured the Eternal Thanos just after he conquered the 6 Infinity Gems, which granted him the omnipotence. Then, what is she doing in a Spider-Man site? Simple. She killed Spider-Man. Well, what many of you are asking right about now, is "WHAT?!" Read on...

Thanos was trying to please his loved one, Mistress Death. She believed that since there are more people alive than those that ever died, half of the sentient life in the Universe should be erased. She resurrected Thanos to do her bidding, ignoring that the gems would give him infinite power. Feeling betrayed, she despised him even when he fulfilled his part of the bargain and killed half of the universe's population (out of curiosity, Mary Jane was in that half, as were many heroes, including Daredevil, Black Cat, Beast, Archangel, Fantastic 4 and Dagger). In comes Terraxia.

Knowing of the upcoming attack of a force composed by the heroes who were still alive, Thanos asked Death if she would be at his side in the ensuing battle. She turned his back on him, and he created Terraxia, at his image. When the heroes arrived at Thanos' Cosmic Fortress, he froze them out of the time stream. Mephisto, Thanos' ally, persuaded him to shut off most of his powers, to make the fight tougher, in order to impress Death. So he did, depriving himself of the control over Time, Soul, Reality, Space and Mind, keeping only Power. By doing this, Mephisto was trying to increase the chances of a defeat for Thanos, but when the the timestream was restored, Thanos was able to kill all of the heroes one by one. Soon after, Terraxia entered the fray, and ripped off Ironman's head, and smashed Spidey's with a rock. Ultimately, Thanos killed the last man standing, Captain America, cursing himself for his stupidity, as he almost loses the gauntlet with the Infinity gems to the Silver Surfer. Again, he regains his powers, and he defeats a cosmic scale attack, which included Galactus, two Celestials, Order, Chaos, the Stranger, Death, Mephisto, and finally Eternity.

Thanos takes Eternity's place as the center of all reality, leaving his body with the Gauntlet. His alledged granddaughter, Nebula (who was transported to the monument in the beginning of the saga as a walking corpse, as an attempt to both impress Death and punish her for her insolence), sees the Gauntlet on his inanimate body and takes it for herself, becoming the new omnipotent being, and assuming her previous form. As a revenge, she warps Thanos and Terraxia, leaving them adrift in space. Terraxia dies, as she wasn't made to survive in the vacuum without her master's powers, and Thanos is transported to Earth by Adam Warlock, to prepare the attack against Nebula.

At the end of the "Infinity Gauntlet", Adam Warlock retained the Gauntlet, and all of those who died during the confrontations were resurrected, many with no recollection of what had happened to them. The Infinity Trilogy would lead to two more sequels in the following months, "Infinity War", and "Infinity Crusade", each of them featuring a part of Warlock. When he became the Supreme being, he expelled from within himself all good and evil, so he could be a neutral and fair god. Magus, his evil side's physical manifestation, was the villain in War, while Goddess, his good side's physical manifestation, was the villain in Crusade. Out of curiosity, Doppelganger was spawned by Magus during the War.