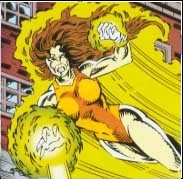 Dagny Forrester was born to wealth. She and her brother Cedric became scientists and formed a research company with laboratories in New York and the South of France. Together, Dagny and Cedric develop the Corona experiment that consists of putting a human subject in a big tube filled with a yellow liquid and subjecting them to chemical and radiation treatments which in turn endows them with super-powers. Dagny volunteers to undergo the process but Cedric chickens out halfway through, which turns Dagny into Corona but leaves her with less than the full power she craves. During the experiment, chemicals are flushed into the New York water system. As a result, New Yorkers (including Peter Parker's wife Mary Jane Watson) start contracting a disease that becomes known as SoHo fever. Attempting to help the sick, Spider-Man finds himself caught in the middle of the feud between Cedric and Corona. Cedric has an antidote for the Fever but first wants to make sure Corona is captured so he can experiment on her. Corona wants the antidote to gain her full power, which will also prevent her from exploding like an atomic bomb. In the stalemate that follows, Corona accidentally wipes out the antidote. She doesn't explode but instead metamorphoses into a hag-like "shriveled husk". She blames this change on Spider-Man.

Eventually, Cedric and Harry Osborn recreate the antidote. Spidey saves Corona from committing suicide only to have her knocked unconscious by Cedric's armed guards. Spidey wants to help her but he is blocked by a court order that gives Cedric custody of his sister. Cedric gets away scot-free. He hauls Corona off to use as a laboratory guinea pig.

Once in the lab, Cedric implants a bio-monitor that stabilizes Corona's body chemistry so that she loses the "shriveled husk" look. But the monitor also stimulates the pain centers of the brain when triggered by a remote. This turns Corona into Cedric's slave. Later,though, a cheap hood named Lenny "The Operator" Flynn takes the remote away. Lenny takes over Cedric's business and uses Corona as his bodyguard. Eventually Spider-Man intercedes, the remote is destroyed, Lenny turns tail and runs, Spidey dumps Cedric into a garbage can, and a freed Corona flies away to seek her destiny. That destiny has yet to be revealed.