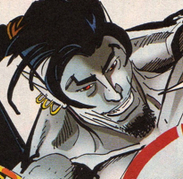 The Gathering of Five ritual caused Norman Osborn to once again disappear into obscurity, after being rescued by his loyal Scriers. And when Norman goes off into obscurity, the nut-jobs seem to come out of the wood-work trying to exploit or deride him. The latest nut-job: a Rebel Scrier, named Matthew DeRoma, who led a splinter sect of the Scrier Cabal with the goal of removing Norman's influence from the ancient mystical cult.

The Rebel Scrier's (or Scrier Junior's) story begins with Spider-Man perched high upon a water tower looking down at the city. His gazing is interrupted by a scream coming from the penthouse apartment of Liz Allan and her son, Normie Osborn. When Spidey arrives at their home, he finds a group of armed thugs who have attacked Liz and Normie. Spider-Man quickly dismantles the thugs, but when he approaches Liz to see if she is okay, she screams for him to leave, blaming him for the trouble she consistently finds herself in. As Liz is telling Spider-Man to "just leave", a shirtless, pony-tailed, albino skin-toned figure waltzes into the room whom Spidey dubs 'Scrier Junior'.

This Scrier is only interested in Normie Osborn, claiming that he "requires the boy" and of course Spider-Man is not going to let that happen. The two square off and the Scrier bests Spidey and convinces the young Osborn that he is superior to the wall crawler and that he can protect him from the man who killed his father. The Scrier takes off with Normie and Spider-Man is soon on his tail, but along the way he runs into an old friend, Harry Osborn. Its not really Harry though, rather some sort of holograph (or apparition) and Spidey is convinced that he's hallucinating. As the Harry-holograph assures Spider-Man that he is the real deal, the Scrier has Normie in his custody and he unveils the reason for this kidnapping. DeRoma loathes Norman Osborn and blames him for destroying the "purity" of the cabal and for sending it on a "tainted, foul path." He tried to create a younger order of the cabal but the old guard remained loyal to Osborn and forced him out. He now has Normie in his possession and has plans for Norman's imminent return.

Spider-Man is able to eventually track down the Scrier and after handing him a solid beat down, the Harry-holograph appears and provides an explanation for his existence. He was created by the Rebel Scrier who used computer technology experts to gather every bit of information regarding Harry's life to form this holograph. They wanted to use this holograph as bait to get Normie, then they wanted Normie to kill his grandfather. The Harry-holograph then helped Spider-Man by suggesting that he short-circuit the DeRoma's gauntlets, the source of his power. The holograph then informed Normie that Spider-Man had nothing to do with his father's death. In one last attempt to capture Normie, the Scrier grabs the young Osborn, but as he backs away with the child, a shadowed figure grabs him and snaps his neck. Spider-Man searches the building to see who this mysterious figure was, but he cannot find him. The insinuation from the story is that it could have been Norman himself, or another a dedicated Scrier. Knowing that both Harry and Norman are alive in the Brand New Day-verse, it could have been either Osborn that killed DeRoma.

The Rebel Scrier is presumed dead.