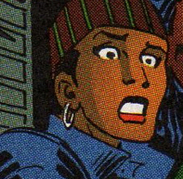 Peter and Flash Thompson met Glory as they were checking out Peter's new apartment. Flash was commenting on what a dump it was, when Glory introduced herself as a neighbor from down the hall. A model, she and Peter immediately hit it off when she found out he was a photographer. Flash stopped complaining about the apartment after that. Glory soon invited Peter to a party, despite the noise caused when he threw a telephone at a hologram of Wilson Fisk, created by the Daniel Berkhart Mysterio. (Amazing Spider-Man #140)

She also came to the rescue after Peter returned to the apartment after having his life energy drained by a machine of the Kingpin's. The device was used in an attempted to save the life of Fisk's son, Richard Fisk. She ran to get a doctor but Peter quickly left to get help from Dr Curtis Connors. (Amazing Spider-Man #164)

Glory was also a near victim of Michael Morbius, the Living Vampire. Working late at the Bugle one night, Glory was taken by Morbius, who was under the control of the being called the Empathoid. Her kidnapping drew out Spider-Man, who was soon under the attack of the Empathoid himself. (Spectacular Spider-Man #7 & #8)

”The Hitman’s Back in Town!”

Glory soon took the position of J. Jonah Jameson's personal assistant at the Daily Bugle. She handled her boss much better than previous secretaries had, except perhaps for Betty. She proved it when a hit man hired by the People's Liberation Army threatened Jonah and Marla Jameson in his office. She calmly called security while a fight between Spider-Man, the Hitman and the Punisher went on. (Amazing Spider-Man #174)

She could even keep cool when Jameson repeatedly called her Glory Brant. Despite that, she tried to console JJ when Robbie Robertson quit the Bugle over his constant harassment of Spider-Man in the newspapers editorials.

Glory was usually seen at the Bugle, and provided exposition for Peter. She got along well with Betty Brant, her predecessor. They often gossiped about Peter and compared notes on working for Jonah and Robbie. She was finally able to have a story of her own once the Lobo Brothers came to New York to kill the Kingpin. She began dating Eduardo Lobo, which was too bad for her, considering he was a werewolf. Eduardo had been using Glory to get any and all information on Fisk that the Bugle had on file. (This was a plan similar to that of the Chameleon's, who was impersonating Jameson at the time to over throw the Kingpin.) Naturally, it ended tragically, with Glory shooting Eduardo as he fought Spider-Man. After thanking her for helping him, Glory told Spidey she had meant to shoot him. (Web of Spider-Man #55)

Glory became a target of Calypso after the voodoo priestess was killed in a battle with Spider-Man and the Lizard. One night Spider-Man took pictures of his fight with two crooks and a large man. He was stunned to see that the man was a zombie, in the old fashioned voodoo sense. He took the photos to the Bugle but refused to sell them to Jameson after learning that the zombie was Glory’s brother, Ramon. Glory had recently returned from a Caribbean cruise and brought home a necklace from Haiti. The necklace contained the soul of Calypso and soon she and Ramon were both under her control. Some of the witch's subordinates kidnapped Glory and attempted to transfer their leaders soul into Glory's body but they were stopped by the web slinger. (Peter Parker: Spider-Man Annual ‘97 #1)

Glory stayed a minor character but did see action when Norman Osborn returned to New York. She was one of the many captives held in the Bugle by the Green Goblin as he battled Peter Parker and Ben Reilly. (Peter Parker: Spider-Man #75)

”Dust in the Wind”

The Daily Bugle staff went through several layoffs but Glory always seemed to stick around. She had proven to be an invaluable resource to Jonah. She and Peter remained friends through the years and she manged to get him a job interview at a small research and pharmaceutical company that her friend worked at. It was her way of helping him deal with life after Mary Jane was seemingly killed in an airplane crash. He feared he was late for his job interview after dealing with an enraged Sandman (who wanted to kill Electro and Mysterio after they betrayed him) but then found out he was actually early for his appointment. He didn't get the job, as he was over qualified. (Amazing Spider-Man (vol. 2) #17)

Robbie's son, Randy Robertson, took Peter in as his room mate and asked Peter to put in a good word for him with Glory. He must have been keeping his eye on her for a while. Its hard to believe that they never met, despite the fact that his father and Glory are always at the Daily Bugle. Glory let Peter know to have Randy give her a call, and she wasn't against the idea of seeing a movie with Peter, either. Gloria showed up at Randy's apartment later, surprised to see that Jill Stacy (cousin of Gwen) was also invited. Randy thought he had died and gone to Heaven.

Peter showed up to the party late and immediately started looking for the tiny spider slayers that Alistaire Smythe had sent for him. (The slayers had made a psychic connection to Spider-Man and the small slayers were leading a large one to the apartment. He eventually figured out that the smaller slayers waiting hidden in the homes of his loved ones were being fed commands by the large slayer. As soon as the large robot was destroyed, the others ceased to function.

Despite Glory thinking that Randy was sometimes a bonehead (he suggested Peter sell some of Mary Jane's items to help pay the rent) they did become a sort of couple.

They became a target of Peter (dressed as the Green Goblin and under Norman Osborn's control) when Osborn attempted to make him his heir. (Amazing Spider-Man (vol. 2) #25)

Randy, Glory, Peter and Jill often double dated and once were interrupted by two guys hired to kill a smelly black cat. She also helped set Peter up with a tattooed, body pierced voodoo priestess. Yeah, that didn't last.

Neither did her relationship to Randy. She did, however, become Jameson's press secretary after he became mayor of New York. She made it clear to Peter that she wouldn't tolerate any of his sarcasm towards the new mayor after he was allowed to become Jameson's photographer. (Amazing Spider-Man #602) She was with Mayor Jameson when Alistaire Smythe, the Spider-Slayers and Scorpion attacked John and Jonah. During the fight, the Spider-Slayers killed Jonah's wife, Marla. (Amazing Spider-Man #654)

She was also comforting Betty Brant when she broke up with Flash Thompson, who assumed Flash missed a V.A. meeting because he was drinking again. Actually, he had been on a secret U.S. government mission while bonded to the Venom symbiote.

Glory, her new boyfriend and Mary Jane briefly ran into the Vulture's new henchmen at The Wake, a dance club that Toomes was using as a hideout. The enhanced thugs demonstrated their strength on Glory's boyfriend, letting the crowd know who was running the club. Mary Jane got suspicious and called Peter. (Amazing Spider-Man #675)

As press secretary, she has sometimes acted as a messenger for Mayor Jameson, such as when she went to Horizon Labs to tell Max Modell about the growing list of grievances that the mayor had with the company. During a demonstration of "Parker Particles," a teenage student named Andrew Maguire was given superhuman powers when the experiment that Peter was overseeing failed. He was given the codename of "Alpha" and started using his powers for good, but recklessly. Glory was sent to Horizon to voice Jameson's displeasure with the situation. (Amazing Spider-Man #693)

She was also used as a hostage at Avengers Tower when Doctor Octopus switched minds with Peter Parker. Glory, JJJ and his father, Aunt May, Ben Urich, Robbie Robertson, Norah Winters, the staff of Horizon Labs and Mary Jane had all been fooled into trusting "Spider-Man" when "Doctor Octopus" escaped from prison. "Doc Ock" had allied himself with the Scorpion and Hydro-Man and when "Spider-Man" mentioned that Jameson was present at Avengers Tower, Scorpion convinced Hydro-Man to go after him with him. Hydro-Man found the assembled hostages but was defeated by a device created by the Horizon scientists. The group escaped just as the Scorpion was defeated and "Ock" and "Spider-Man" tumbled out of the tower's window. (Amazing Spider-Man #700)

Gloria went with Mayor Jameson to The Raft (a floating prison for super criminals) to witness the execution of Alistaire Smythe. He attempted an escape but was soon battling the Superior Spider-Man. Smythe had an ace up his sleeve, the other convicts on The Raft and his tiny robots soon freed and upgraded the Vulture, Scorpion and Boomerang. (Superior Spider-Man #11) Spider-Man anticipated that the assembled witnesses would become Smythe's hostages and arranged for his own mini-robots to project a force field around the civilians. Jameson left the safety of the force field before it closed, despite Gloria's protests. Soon, she became a target of the Vulture, who was sent by Smythe to kill the hostages. (Superior Spider-Man #12)

Glory's personal ethics finally forced her to quit as Jameson's assistant after he agreed to use spider slayers to kill Spider-Man. She was furious that as New York was under attack from the Goblin King, Jonah was more concerned with his vendetta against Spider-Man. She resigned, reminding him that if his deceased wife's wish that he would give up his hatred wasn't enough, then nothing would be. (Superior Spider-Man #29)

Glory was back to journalism with Robby. They were frustrated with Jonah’s new type of news reporting, inspired by Norah Winters. They refused to stoop to “click bait” reporting and relied on old fashioned investigative news. Glory informed Robby that there was rumors of Tombstone working with the Beetle, who was his daughter. Tombstone had taken over the business aspect of organized crime while Janice worked at the street level. (Amazing Spider-Man (vol. 5) #61)

After Robbie returned from lunch with Randy, Glory showed him some photos sent by freelancers showing Beetle on a roof on the Lower East Side. When Robbie opened the file, saw saw that Randy was Beetle’s boyfriend. (Amazing Spider-Man (vol. 5) #62)