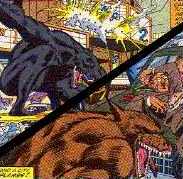 Carlos and Eduardo Lobo grew up on their own on the streets of Puebla De Zaragoza, Mexico, surviving by stealing and scavenging. As a teen-ager, Eduardo fell in love with Esmelda Valdez, the daughter of a wealthy range owner. The two began a secretive relationship that was discovered by Esmelda's brother Ramone. One full-moon night, Ramone and his men ambushed the lovers and tried to chase Eduardo away by whipping him. Pain and rage from this whipping triggered a mutant change in Eduardo's body. He turned into a black-furred werewolf and slaughtered Ramone and his men. But when he woke up in his human form the next morning, he discovered he had murdered Esmelda as well.

Carlos also discovered he was a mutant werewolf and the brothers turned to crime, using their powers to unite all the mobs of South Texas into Los Hermanos De La Luna. The Lobos were so successful that they not only gained a mansion in a Dallas suburb but drew the attention of the Arranger, Wilson Fisk's lieutenant. The Arranger used the Persuader to brainwash the Punisher into attempting an assassination of the Lobos. The plan failed thanks to Spider-Man's interference and the iron will of the Punisher, who ended up killing the Persuader instead. The Lobos knew who was responsible for the attempt and they vowed revenge.

And so, the Lobos move to New York City and begin systematically slaughtering the Kingpin's men. They leave messages in blood at the murder scenes which say things like "Kingpin: Wolves Bite Back" and "Kingpin-Wolves Kill".

Soon after arriving in New York, Eduardo Lobo bumps into J. Jonah Jameson's secretary Gloria Grant in the lobby of the Daily Bugle. Eduardo plans to seduce Gloria in order to get the newspaper's file on the Kingpin. The plan succeeds. Gloria falls in love with Eduardo and, after much soul-searching, steals the file for him. Eduardo's subsequent plan to cast Gloria aside is itself cast aside when Eduardo discovers he has fallen in love with her as well.

The gang war accelerates, as Gloria comes to realize that her lover is not only a crime-lord but also a werewolf. The Lobos initiate a helicopter assault on Fisk Tower and make their way to the offices of the Kingpin. But the Kingpin has planned ahead and the figure that the brothers attack turns out to be a simulacrum of the crime leader.

Finally, the Kingpin contacts the Lobos in an attempt to make peace. They meet at the Unisphere in Queens (Eduardo brings Gloria along) and the Lobos inform the Kingpin that their price for peace is the life of the Arranger; the man who set up the attempt on their lives. The Kingpin appears ready to agree when the meeting is crashed by Hammerhead and the Chameleon who are also looking to be the crime leaders of New York (and by Spider-Man as well). In the ensuing battle, Gloria gets her hands on the Arranger's gun, which is loaded with silver bullets. As Spider-Man and Eduardo fight, Gloria fires the gun, killing her lover. Distraught, she reveals that she was actually aiming at Spider-Man and missed. Carlos Lobo is knocked unconscious in this battle and is presumably arrested and subsequently imprisoned.

Carlos was apparently deported back to Mexico and he stayed away for many years, only reappearing after getting involved with human trafficking. He now had his sister, Esmeralda, as a partner and they arrived in Houston, Texas, after one of their "shipments" was intercepted. The one surviving person in the overheated container was found by Kaine Parker, the Scarlet Spider. (Scarlet Spider #1) The young survivor, a woman named Aracely, had gifts that the Lobos wanted and they crossed the boarder to find her. They found Aracely with Kaine and while she escaped, the wolves over powered and killed the Scarlet Spider. (Scarlet Spider #13)

The Lobos tracked Aracely down and debated if they should killer (as their employer had demanded) or make her an ally. They seemed to know more about her than she did and Esmeralda claimed that she may be Huitzilopochtli, a reincarnated god. Carlos wanted to obey the client's wishes, as he had restored their power and claimed that he could bring Eduardo back from the dead. They were distracted when a street gang interrupted them and a fight broke out over the Lobos trespassing in the gang's territory. Aracely used the distraction to escape. (Scarlet Spider #14)

After killing the gang, Carlos tracked Aracely to a dumpster and was about to kill her when Kaine arrived. He had changed since his death and had made a deal with a supernatural being called The Other. He was more spider than man now and was much more brutal of his handling of the werewolves than he had been before. Over the course of the fight, Carlos lost an eye, his right arm and was stabbed through the chest. Esmeralda rescued him and returned to Mexico for medical treatment. While recuperating, Carlos was killed by the man that hired them to kill Aracely. The man knew that Huitzilopochtli had returned and would come to kill him. The man had a group to protect him. (Scarlet Spider #15)