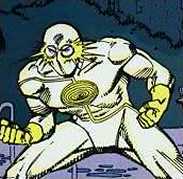 Roland Rayburn was a mutant with the power of persuading others to do whatever he suggested. Hardly aware of his abilities, Rayburn used them subconsciously to become a top-notch trader on Wall Street. Unfortunately, his abilities were noticed by the Kingpin who sent the hitman Tombstone to abduct him. He was taken to the Kingpin's assistant (known as the Arranger) and was there subjected to various drugs and intimidation until he was brainwashed into working for Fisk. He donned a costume and became the Persuader. Once he started using his power consciously, he learned that he very much enjoyed manipulating others to his will.

The Persuader's first job involved persuading the Punisher to join the Kingpin's war against the Lobo Brothers. Unfortunately for the Persuader, the Punisher became a particularly difficult subject to keep in his power. As soon as the Punisher broke free of the persuasion, he ruthlessly gunned down his captor, ending the short, ultimately unlucky career and life of the Persuader.

The Persuader is only a Spider-Man villain in that he solely appeared in Spectacular Spider-Man, but he never once used his power on the Web-Slinger. He may be more accurately termed a Punisher villain who didn't live long enough to appear anywhere else.