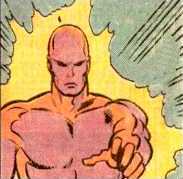 The Empathoid was created by an extra-dimensional race at some point in the past, although it is unclear how long ago that was. Its masters created it to be a superior android servant, one which would be better attuned to its human masters because it shared their feelings. However, once it tasted emotion, it craved more, ever stronger, ever more violent. It eventually exhausted and outlived its creators, leaving it stranded on its now uninhabited world. Without emotions to give it purpose, it eventually lapsed into a dormant state below the surface of a temple on its world.

The pseudo-vampire known as Morbius used the dimension-spanning palm-bands of the Living Eraser to flee Earth to prevent him from making any humans his victims. Unwittingly traveling to the Empathoid's realm, his strong emotions caused the Empathoid to awaken. The Empathoid entered the form of Morbius and forced him to use the palm-bands to return to Earth, where it could feed on the emotions of its inhabitants.

The Empathoid derives energy by draining the emotions of others. Its form was designed to be self-regenerating and virtually indestructible, making it effectively immortal. Its form is semi-solid, allowing it to contact others, but making it immune to most forms of physical attack, as most objects pass straight through it. It can merge with its intended victim and feed off of his or her emotions. It communicates telepathically with its victim and can cause him or her intense physical pain if they do not obey its wishes. It gained power from intense emotions, although there was a limit to how much it could absorb before overloading.