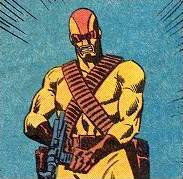 (Amazing Spider-Man #175, flashback) - In Vietnam, Marine Frank Castle was badly injured by a Viet Cong explosive, and surrounded by the enemy. However, Lieutenant Burt Kenyon calmly appeared, gunned down the Viet Cong, and dragged Castle to safety. Kenyon told Castle that he now owed him a life. Two months later, Kenyon was declared mentally unfit for service and discharged. (Behind the Scenes) - After Castle became the vigilante Punisher, the underworld hired and outfitted Kenyon as a sort of opposite number to the vigilante. Kenyon became a high-priced hitman and mercenary.

However, the Hitman had planted tracers on both the Vulture and Spider-Man. The Hitman soon found and attacked the Vulture, leading the criminal on a chase that took them near Spider-Man's location (Peter Parker's apartment). Drawn outside by the sounds of the battle, Spider-Man found himself in an aerial battle with the Vulture, with the Hitman taking potshots at him the whole time. Finally, as Spider-Man and the Vulture battled near a radio tower, Spider-Man feigned weakness and left himself dangling from a webline. As he expected, the Hitman couldn't resist teasing the swooping Vulture until the very last moment, and thus by turning at the last moment Spider-Man allowed the Hitman's shot to strike the Vulture's power pack, defeating him. The Hitman himself fled the scene, and Spider-Man determined to give the Hitman's tracer to the Punisher in hopes of tracking him down.

In Amazing Spider-Man #174 - Some months later, the Punisher, apparently looking for the Hitman, found himself battling a terrorist group called the People's Liberation Front.

(The People's Liberation Front and its unnamed leader were essentially just radical terrorists. The members were fanatically devoted to their nebulousleftist cause, as was the leader. They carried automatic weapons, but were no match for either the Punisher or Spider-Man in combat. They were created by Len Wein, Ross Andru, Jim Mooney and Tony DeZuniga.)

Meanwhile, the PLF's leader hired the Hitman to kidnap and kill J. Jonah Jameson, who had been writing a series of damaging editorials about the group. Despite the Punisher's surveillance, the Hitman managed to slip into Jameson's office, confronting the publisher and his lover Marla Madison. Madison managed to run on the Daily Bugle's intercom system, broadcasting the Hitman's threats to the entire office. This drew Spider-Man and the Punisher into the office, but the two broke in simultaneously, and between the resulting confusion and the cramped confines of the office, the Punisher was unable to reach the Hitman as the latter battled Spider-Man. The fray also brought the Bugle's security guards running, and the Hitman used the confusion to drop a gas grenade and head for the roof. Spider-Man was able to follow him, and the two continued fighting, tossing Jameson back and forth as they did so. Finally, the Hitman overcame Spider-Man (whose arm was injured from a recent battle with the Molten Man) and loaded Jameson aboard his mini-copter. The Punisher finally made it to the rooftop, was recognized as Castle by the Hitman, and exchanged gunfire with Kenyon, but Spider-Man feared the Punisher would kill Jameson accidentally and stopped him. Spidey managed to plant a spider-tracer on the Hitman's copter, and he and the Punisher fled the Bugle's security troops to pursue the Hitman.

After the Punisher explained his link with the Hitman, the two crimefighters beat information out of some PLF goons, and thus learned that the Hitman, Jameson, and the PLF's leader were headed for the Statue of Liberty. The PLF planned to blow up the statue with Jameson in it as some kind of symbolic gesture. However, Spider-Man and the Punisher appeared and routed the PLF forces. When the PLF leader tried to blow the statue up with everyone on it, the Hitman gunned him down and tried to escape. Spider-Man destroyed his mini-copter, but was left so groggy that the Hitman was able to shoot him in the arm, throwing him off the statue's crown. The Punisher and the Hitman found themselves in a standoff, with Kenyon using Jameson as a human shield. Before anything could happen, Spider-Man made his way back to the crown and pulled Jameson away from the Hitman. The Punisher blasted the Hitman, leaving him dangling from the crown, as were Spider-Man and Jameson. Forced to choose between saving the injured Spider-Man and Jameson or Kenyon, the Punisher chose Spider-Man. Kenyon told the Punisher that though Castle owed him a life, that life didn't have to be Kenyon's, and then allowed himself to fall to his death.

Kenyon was returned to life many years later by the Jackal, (Ben Reilly.) Reilly was cloning everyone that had died that Spider-Man would feel responsible for. To reassure Spidey, Jackal told him that had been given therapy by Ashley Kafka. Reilly offered to resurrect their uncle Ben Parker if it would convince Peter to join him but he refused. Jackal ordered the clones to kill him. (The Clone Conspiracy #4)

Clarifications: The Hitman is not to be confused with:
Hitman, Jimmy Pierce, a boxer who tried to become the next Punisher, @ Punisher II #87
Hitmaker, a foe of Wonder Man, @Wonder Man Annual #1