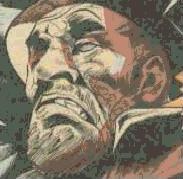 Stone-Face is an African-American Harlem gang-lord specializing in numbers-running and protection money. He plays up his African heritage for his own selfish ends, seeking to increase racial tension in order to fill his own coffers.

One of his numbers runners is Jody Casper, nephew to Sam Wilson a.k.a The Falcon. Jody thinks Stone-Face is the biggest man around. When he is nabbed by the police, Jody is sure Stone-Face will come through for him. But it is Captain America who speaks up for Jody, earning him a suspended sentence. When Stone-Face learns that Jody has gone free, he believes that his numbers runner has ratted on him. He sends two hoods to Jody's house to teach him a lesson. This brings Captain America and the Falcon into the fray. After taking care of the two hoods, they beat up and capture Stone-Face. All of this teaches Jody that crime does not pay.

Out on bail, Stone-Face (now called Stone Face) captures the Falcon, then blackmails the Governor of New York, telling his representative that any attempt to build a State Office Building in Harlem will be destroyed by rioting unless the state hands over a million dollars in cash. Unfortunately, his abduction of the Falcon brings Captain America and Spider-Man down on him. Those two heroes, along with the freed Falcon, take down Stone Face and hand him over to the police.

Somehow, Stone Face (now called Stoneface) manages to escape and make his way to Nigeria. Lonely for an American woman, he kidnaps Leila, who just happens to be the Falcon's girlfriend. Falcon, now sporting a pair of wings, and the Black Panther get together and knock the stuffing out of Stoneface again.

Released from a Nigerian prison after just a few months, Stoneface (now again called Stone-Face) uses his money and influence to return to the United States and start up the Young Watchers, a "Guardian Angels-type" vigilante group that uses real "do-gooders" to cover up the activities of the crooked inner circle. Spider-Man and the Falcon team up to defeat Stone-Face and his gang, while the honest Young Watchers decide to stay together and protect the neighborhood.

After this fiasco, Stone-Face (back again to being Stoneface) grows his hair and beard long, gets new hired muscle named Rufus and Jackson, and concocts some ridiculous scheme to hold an auction for international spies or something like that. Unfortunately, Power Man and Iron Fist get wind of the whole thing. Luke Cage punches Stoneface across the room. Presumably, he's been in prison ever since.