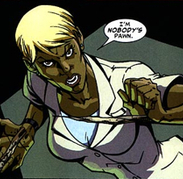 Miss Arrow lived because Spider-Man died. After being killed by Morlun, Peter met a spider god. The god told him that it wasn't his time to die and would grant him the ability to return to life if he agreed to embrace his inner spider. This meant accepting certain abilities that he might consider frightening. (He was stronger than before, had stingers that came from his wrists and had a highly tuned spider-sense, that let him "see" in the dark. This was all much like a storyline that took place shortly before this one, where Peter was transformed by the Queen.) Peter agreed to the bargain and returned to life, which angered another spider god.

This other god thought that the bargain went against the natural order and demanded that another being be sent to earth as a counter balance. This creature was Spider-Man's "Other," his opposite. Peter, Mary Jane and Aunt May were living in Stark Towers at the time. Peter's old body was being held by Tony Stark (Iron Man) for research, until Peter found that it had been devoured by a swarm of spiders. He recognized them as cannibal spiders, which got their name for obvious reasons.

The spiders then came together to form a humanoid woman. It smashed through a wall and escaped, but not before a pair of stingers tore their way through Spider-Man's wrists. It seemed to have happened on reflex, done without his bidding. They receded back into his wrists as the spider-creature escaped. Chasing the creature, he learned that it could talk. It then explained to him how it came to be before it jumped off a building and swarmed into a sewer.

A few weeks later, Peter got into a fight with coach Flash Thompson at Midtown High School where both were working as teachers. Flash had a gym ball bounced off his head and woke up in the nurse's office. He was immediately attracted to the new school nurse, but didn't get to ask her out until after helping Spidey rid the school of not one, but two Mysterios: Francis Klum and Daniel Berkhart. Afterward, Flash and Arrow became a couple.

This was taking place during the Superhuman Registration Act, during which Peter unmasked on TV. In response, Deborah Whitman wrote a book claiming that Peter Parker ruined her life as Spider-Man. Flash went to confront Deb, as did Betty Brant. Flash and Betty ran into each other and agreed to go out and get reacquainted. This didn't sit well with Arrow. She followed them to the restaurant, and scared the daylights out of Betty as she used the bathroom. Thousands of spiders came crawling out of the toilet, making Betty run out of the bathroom screaming. When she and the manager went back, there were no spiders, only a mirror and some cocaine. The manager asked Betty and Flash to leave.

On their way home, Betty was sure that she saw Arrow following them on the street. Her hysterics made Flash lose control of the car, and crash into a squad car. After she got out of jail, Betty went to console Peter after Aunt May was shot by the Kingpin's sniper. As they discussed what messes their lives were at the moment, they realized that they had been seeing swarms of spiders. Betty was sure that Arrow was behind her troubles with Flash and Peter was concerned that she didn't trigger his spider sense. They decided to do a google search on "Arrow" and "spiders."

Meanwhile, Flash was going bowling with professional bowler Kelly Kulick. Again, Arrow was not happy to see him with another woman. She tried to talk him into leaving the bowling alley with her, but when he refused, she tried forcing him. That's when Spider-Man arrived. He and Betty had found out that "ero" was a species of cannibal spiders. That's when it all clicked and Peter went looking for Flash. Ero and Flash escaped after Ero tossed Kelly from a truck, forcing Spidey to save her.

Back at her abandoned church hideout, Ero had Flash webbed to the ceiling and explained to him what she needed from him. Flash had been in a coma for several months due to a car accident caused by the Green Goblin. During that time, his tantric life force went unspent, leaving him with a surplus. She intended to use that surplus to feed her unborn offspring. Except, her species reproductive cycle involved stuffing an egg sack down a host's throat, where the babies would hatch and feed off the life energy. With Flash's excess, Ero expected thousands of offspring. That's why she needed him away from other women. She couldn't chance him using up some of that energy.

Spider-Man arrived after being told by Betty that a large cocoon had been found on the side of an old church. He bet that Ero had come from a similar cocoon that he had after he was reborn. Ero quickly got the upper hand on Spidey, who was saved by a shotgun toting Betty Brant. Betty quickly destroyed the egg sack and blew away Ero. (When Peter asked her when she started carrying around a shotgun with sliver bullets with crosses etched into them, she said "I'm a reporter for the Daily Bugle...Girl's gotta be prepared.") Ero then warned Betty to sleep with the gun every night, because she just destroyed Ero's one chance to reproduce.

As she glided away on a web parachute, Spider-Man caught up with her and forced her to crash into the Central Park Zoo aviary. Peter told her that while she considered herself to be his natural predator, it was really the other way around. While it was the exotic birds that were eating her alive, he was the one that gave her to them. Before Ero disappeared, he told her to tell any other magical beings to leave him and his family alone, or he would do the same to them. He stepped on an escaping spider for good measure.

Aspects of this story were repeated in Grim Hunt, when Kraven the Hunter was resurrected by his wife, Sasha Kravinoff. Peter's clone, Kaine Parker, had been mistaken as Spider-Man and sacrificed in his place. He returned by the end of the story, courtesy of the spider-god.