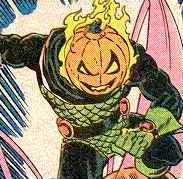 Jason Philip Macendale didn't even start out as a Spider-Man villain. He was initially defeated by Machine Man and sent to a hospital when it seemed he was in a coma. The coma was merely a trick, as a chemical was kept in a hollow tooth, which simulated the comatose state. Macendale suspected that being taken to a hospital would be an easier escape than from a prison. After he awoke and his men were attempting to break him out, Jack O'Lantern took the entire hospital hostage. Peter meanwhile was at Empire State Universities physics department when he got a call from Aunt May, who told him that Nathan Lubensky was at Bellevue, which was under siege.

Spider-Man arrived at the hospital and at first managed to escape detection, until two henchmen spotted him and alerted Jack O'Lantern, who ordered the hostages to be shot. Spidey tore through a wall and disarmed the gunmen and Jack made a run for it. Spidey pursued and Jack turned out the lights, but Spider-Man easily evaded all of his attacks. Jack realized he was outmatched and tried to fly out a window on his pogo platform but Spidey beat him with one punch.

Spider-Man dealt with Macendale again after he stole the Hobgoblin's ruined battle van from a police escort. Peter heard about the disappearance of the battle van at the Daily Bugle and eventually found the vehicle being stripped by Jack's goons. Jack O'Lantern quickly arrived to deal with the web swinger and led him away from the confiscated van. Macendale led Spider-Man around the city, eventually crashing into a toy store, where he hoped that the cramped space would make it harder for Spider-Man to maneuver. He hoped wrong, as Spidey soon had him pinned against a wall. Jack managed to escape after he blasted some exposed wires in a wall and Spider-Man went to save a mother and child from being electrocuted.

Jason Macendale's back story was presented his next appearance, when he faced Silver Sable. Sable and the Wild Pack were hired by a South African country who claimed that Macendale was training rebels inside their boarders. It was then that it was revealed that Macendale was a former Marine and possibly had C.I.A. training. His methods were too extreme for the Agency and he was fired, but used his skills as a mercenary and terrorist for hire. He wore the Jack O'Lantern costume to make a name for himself in the world of international espionage. Sable learned that Spider-Man had faced Macendale previously and sent him a message in the Daily Bugle to meet with her. Macendale also saw the advertisement in the newspaper and ordered his men to kill Sable before she could enlist the wall crawler.

Witnessing a shooting in New York, Sable couldn't help remembering her own mother's murder. She went after the thugs responsible, leaving without the help of the Wild Pack. This proved unwise, as one of Jack O'Lantern's spies reported to his boss that she left the Symkarian Embassy alone. Sable tracked the muggers to an tenement and was promptly ambushed by Jack O'Lantern's mercenaries. She defeated both the hired thugs and the street punks, and beat Jack O'Lantern by tossing a propane gas heater at him and his flaming helmet ignited it. He escaped with a shattered helmet.

Jason Macendale was seen later, speaking first with Roderick Kingsley (or maybe it was actually Daniel, who can tell with duplicitous identical twins?) warning him not to let anyone know about their arrangement or else they'd both end up in jail. He soon met up with the Rose and offered to either break the Hobgoblin out of jail for him (the real Hobgoblin had framed Flash Thompson for his crimes) or take his place in the Rose's organization. Macendale left after the Rose said he'd think about it and a thug mentioned that the real Hobgoblin wouldn't like Macendale trying to take his place. The Rose pondered the idea of letting Jack O'Lantern and Hobgoblin kill each other.

Macendale later told his thugs that since no crime lord seemed to take his talents seriously, they would pull off a crime that would have all of the mobs begging to have Jack O'Lantern work for them. He later broke into the prison where Thompson was being held and broke him out, despite Flash's resistance. Hobgoblin was not happy when he heard that his patsy had escaped, until the Rose told him that it could work to his benefit if Thompson were dead. Hobby saw the potential in the idea, of letting the police think that he was dead. Hobgoblin later showed up at Jack O'Lantern's hideout, still not happy with his interference. The battle left both of them injured and dazed. Both promised that next time, the other would not be so lucky.

Jack O'Lantern made his next move after the Kingpin disappeared following a costly war with Daredevil. Fisk's absence from the crime hierarchy left a power vacuum and various minor crime lords fought to gain power. These included Silvermane, Hobgoblin, Hammerhead, the Arranger and the Rose. Jack O'Lantern worked for the Arranger, Wilson Fisk's lieutenant, and carried out a hit on Silvermane. Macendale also attempted to make an example of, on the Arranger's orders, a junkyard that was used by the mafia after they stopped paying protection money. He was driven away by Hammerhead's gang. Later, all of the major players in the gang war gathered to talk but were nearly killed by the Punisher, who was stopped by Spider-Man. In the chaos, one of Arranger's underlings tried to assassinate him but was stopped by Jack O'Lantern and Hobgoblin, under the Rose's orders. Rose explained that he wanted to form an alliance with Arranger.

Another meeting was set up, with Jack and Hobgoblin acting as security. The police staked out the meeting but one of the non super powered thugs spotted them and blew up the elevated train in an attempt to kill the cop. The fire spread to the meeting area as a shootout began between the police and the mobsters. Between the bullets flying and the arrival of Spider-Man, Jack O'Lantern left Hobgoblin to fend for himself.

Fisk soon returned from his exile and fired Jack O'Lantern. While he had done good work for the Arranger in Kingpin's absence, he had not shown himself to be sufficient for the job of chief assassin in his criminal organization. Macendale left, warning that Kingpin would regret his decision. Still fuming over the rejection, Macendale was ambushed in his hideout by Hobgoblin, who was still angry over being left by Jack O'Lantern at the shootout. A hired gun named Alfredo had a device that shut down Hobgoblin weapons and glider and nearly killed him, before Jack O'Lantern intervened. Jack wanted to kill Hobgoblin himself but Hobby used the distraction to escape, promising that Jack hasn't heard the last of him.

Rightfully fearing for his life, Macendale hired the Foreigner to kill the Hobgoblin. By this time, the real Hobgoblin (Roderick Kingsley) was using Ned Leeds as a stand in for the most dangerous assignments. Ned was the one that was killed, leaving everyone thinking that the original Hobgoblin was at long last gone. Macendale took over as the Hobgoblin. See Hobgoblin IV for the rest of his story.