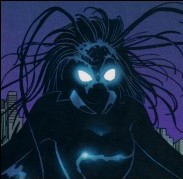 When Spidey battled the Shade in the Astral Plane, he strayed from the path, which Doctor Strange had warned him not to. As a result, the Spider-Wasp, a mystical predator sensed his presence and tracked him down to our plane.

Spider-wasps are natural enemies of spiders, the most efficient spider-killers in the Marvel Universe. They track down large spiders, sting them, and then drag their sorry paralyzed rears to a previously built nest, where they lay (usually only) one egg inside the spider's body. The larger the species, the larger the captured spider needs to be (yes, they catch tarantulas). When the larva is born, it has some nice, juicy living food to sustain it. The spider lasts as long as it is needed.

After a quick fight, from which Peter fled, Shathra went to the press, under a human form, and told them she was Spider-Man's lover, told them about Spidey's insatiable appetite for sex and kinky habits. (Amazing Spider-Man (vol. 2) #46)

"The Life and Death of Spiders"

She lied about his honesty, said he used to make fun of the other heroes, and almost reveled his identity before an enraged Spider-Man crashed in the studio and attacked her live on TV. That's what she wanted, an enraged Spider to feed to her children. She reverted to her true form (still on live TV, showing that she was an untrustworthy source), and the fight continued in the streets, with Peter being poisoned and seeking refuge in a spider exibit. Shathra was unable to track him among so many spiders, so Peter was safe from her, but dying from the poison. (Amazing Spider-Man (vol. 2) #47)

Ezekiel Sims found him and took him to a temple in Ghana, to where Shathra followed. There Peter was able to remain focused enough to battle Shathra, who was engulfed by a swarm of spiders and dragged into a pit before Peter could do anything. When Pete asked Ezekiel what had happened, he said Peter had stunned her and weakened her enough for them... "The food chain goes both ways, you know". (Amazing Spider-Man (vol. 2) #48)

Shathra appeared years later, with a new target: Scarlet Spider III. She disguised herself as Annabelle Adams and slept with a guilt stricken Kaine Parker after Dr. Donald Meland had been eviscerated by Ana Kravinoff. The lovers were confronted by Kaine's friends and his ex-lover, Zoe. She had come to kill him for putting her father into a coma. Zoe fired a grenade launcher into the hotel room, destroying the top part of the building. (Scarlet Spider #24)

Everyone survived the explosion and were caught in the Scarlet Spider's webbing. When Shathra reappeared, Kaine tried to impale her through the head with a wrist spike, which had no effect. She sent her children after him, millions of black wasps which began to eat him alive. Officer Wally Layton shot at the wasp woman and she turned on him. Kaine stopped her by changing in to the creature he became after being accepted as The Other. Shathra ended up torn apart. (Scarlet Spider #25)

"End of the Spider-Verse"

The group managed to escape to a new world with help from Arana, who now had mystic spider totem energy. On Loomworld, Shathra demanded that a nearby nestling show her where they disappeared to but was told that they were somehow outside of the multiverse. Shathra ranted that Peter was one of the only Parkers to have defeated her, and that she had failed to kill or corrupt. (They had traveled to 616-beta, a kind of test run for 616. It had been used by the Great Web to work out all of the kinks and was outside of the multiverse.) In their safe zone, the spiders demanded to know why Morlun was helping them. He told them that he had made his way back to Loomworld, to find what had happened to his father and siblings during Spider-Geddon. The spiders had left the other Inheritors as infants, leaving them helpless and removing them as a threat without killing them. They had been left with the totem called Maybelle Parker, aka "Spider-Ma'am."

However, Maybelle had been changed into one of Shathra's wasps and had eaten the infants. He fought his way across Loomworld and made his way to the throne room and to Shathra. During the fight, she told him that Loomworld and the Great Web didn't belong to the Inheritors, they had stolen it from the gods and demigods that called it home. Solus had made his offspring eat all of them spider totems to make the web think that they were spiders. After centuries of eating, Morlun was more spider than his true self. He used a portal device to escape her but was guided to 616-beta by Julia Carpenter. After Morlun's story, Miles Morales began to change into one of Shathra's wasps, which gave her the ability to see where they were hiding. She told her assembled army of corrupted spider-totems that she had found the last remaining spiders. (Spider-Man (vol. 3) #2)