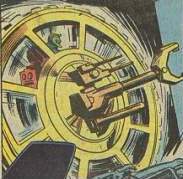 Jackson Weele, a businessman who has been embezzling from his company, hires the Rocket Racer to steal the incriminating "Minerva Document", the main evidence against him. The Racer, however, decides to hold back the evidence and blackmail Weele for twice his promised fee.

Sure that he will be imprisoned for his embezzlement and tired of being taunted by the Rocket Racer, who sarcastically refers to him as "Big Wheel", Jackson decides to commit suicide. The Racer prevents him from going through with it. He brags to Weele that his skateboard has been souped up by the Tinkerer. This gives Jackson an idea.

Weele visits the Tinkerer and requests equipment to get vengeance on the Racer. He tells the Tinkerer about his humiliating nickname. This gets the Tinkerer's creative juices flowing and proves either that the Tinkerer has a subversive sense of humor or that even a criminal genius designer can have his off days.

What the Tinkerer conjures up for Jackson is a giant single metal wheel with waldo-arms. It's big, fast, rolls up walls, and can crush anything in its path. The rider sits in the center and is not affected by the wheel spinning around him. (Though I bet he got awful dizzy trying to peek through.) Jackson Weele has become The Big Wheel.

The Big Wheel immediately sets out after the Rocket Racer and Spider-Man gets caught up in the chase as well. When Spidey webs up the Racer on the roof of a building, the Big Wheel climbs the wall and bears down on the helpless duo. But the web-swinger leaps away with the Racer and Weele, who was in such a hurry for vengeance that he never bothered to learn how to really control the machine, can't stop his contraption from toppling off the roof and plunging into the Hudson River.

Spider-Man tries to rescue Weele but is unsuccessful. It was presumed that the Big Wheel sank directly to the bottom, dooming the unfortunate man inside. It was a long time until he resurfaced. This finally happened when he was sighted at the Villains Anonymous meeting with Armadillo, Equinox, Man-Bull, and Schizoid Man in Spider-Man Unlimited (Vol. 3) #12.