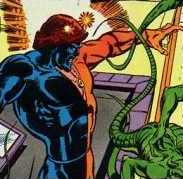 When Chip Martin was born, the doctor warned his parents that the drugs they had used to ease his mother's delivery had entered his bloodstream. It is unclear whether these drugs mutated him to cause him to develop superhuman powers, or if they caused a chemical imbalance which resulted in his personality disorder. His parents blamed this event for all of his differences.

These differences first became apparent when, as an infant, Chip levitated his a toy while simultaneously materializing a hammer and smashing it. In his early years in school, simple criticism by a teacher would cause him to materialize snake-like creatures to terrify everyone present. His parents became aware that a second, more hostile personality would seem to possess Chip when he was stressed, and would utilize his powers. His parents consulted numerous doctors, initially trying to control the other personality through medication.

As he grew older, his other personality and emotional outbursts became more frequent and more violent. Chip finally made progress at a special school were psychiatric care enabled him to control his emotional states. Chip progressed into college, and continued his education as a graduate student at Empire State University. He met Peter Parker when Peter was starting grad school and taking a tour of the facility. Chip was teased by fellow student Steve Hopkins, who tossed a paper ball at him. This minor incident left Chip a nervous wreck, fearing that he nearly "lost control." Later, Chip stayed behind as other students fled for their lives, chased by a cloud of killer bees. These insects were led by Fritz von Meyer, who called himself Swarm. Chip felt a power welling up inside him as he watched the bees in terror, calling the feeling "glorious." (Peter Parker, Spectacular Spider-Man #36) He watched the campus security try and contain Swarm, felt the fear of people around him and tried to absorb it. (Peter Parker, Spectacular Spider-Man #37)

One night, at a costume party held by his parents, he encountered the living vampire Morbius, who had crashed the party in search of a victim. The stress of this encounter caused his other personality to surface and go on a rampage. Wearing the costume from the party, he dubbed himself the Schizoid Man and set out to gain revenge on all he felt had wronged him in his life. (Peter Parker, Spectacular Spider-Man #38)

Blaming his parents for attempting to imprison him, the Schizoid Man attacked him, a police squad, and a crowd of others present at Empire State University. At this time, Spider-Man was himself suffering from excessive hostility brought on by exposure to energy from an "Enervator" used to drain the energy from the Lizard and transferring it to the Iguana. (This happened in Peter Parker, Spectacular Spider-Man #32) After overcoming Chip's demon-like creations, Spider-Man savagely attacked him, beating him senseless, until Curt Connors, realizing the cause of Spider-Man's anger, managed to stop him. Chip was presumably taken away for psychiatric care. (Peter Parker, Spectacular Spider-Man #39)