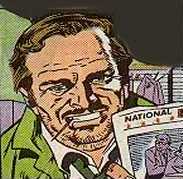 When he first showed up he proved Spidey was a thief, making him a Daily Bugle staff member and JJJ's new pet photographer. Actually, he didn't work a lot with JJJ in the Bugle, because shortly after he exchanged the pictures of Spiderman stealing millionaire Winston Walker's house JJJ was kidnapped by the Chameleon, who started to impersonate him. (The Winston Walker incident brought Spider-Man into conflict with Puma, Prowler, Will O' the Wisp and Rocket Racer.) The Chameleon then started to favor Nick because his pics showed the unheroic Spidey, instead of Peter's "friendly-neighborhood" Spidey.

And so it was. He was there taking the pictures when Joe "Robbie" Robertson was convicted, when Spidey webbed "JJJ" to the roof and threatened him, when the Bugle was destroyed by Graviton. Of course, after the Lobo gang wars the Bugle was bought by Thomas Fireheart, who ran a pro-Spidey campaign (pictures by Peter Parker) and his pictures started to have less and less acceptance. Everybody hated him, except for Cynthia Bernhammer, Robbie's attorney, who had an affair with him. They started an affair while he moved from the Bugle to JJJ's new magazine.

When he got a picture of an unmasked Peter Parker as Spider-Man from the Parker's apartment skylight, he tried to blackmail Peter and Mary Jane. Actually, he would have settled for a night with Mary Jane, a suggestion that earned him a punch in the face from Mrs Parker. MJ must have a mean left cross, as she knocked him out cold. His revealing of the pictures to JJJ and Robbie left Peter and Robbie's relationship strained for quite a while, even tough Robertson knew those were only for publicity.

When he got a shot of a criminal meeting, the Bugle published the pictures with Peter's name. Lucky him, since the mob persecuted Parker for it. Unlucky him, they corrected the mistake (these events, which happen during The Name of The Rose, are better described in the Rose bio).

He disappeared after that until Amazing Spider-Man #384, when the sight of him affected by lung cancer and a cardiac attack made Mary Jane quit smoking. He hadn't lost his wit, though, as he asked MJ for a kiss. A few months later he was revealed to have died.