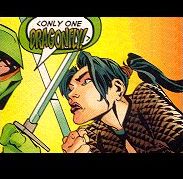 Meiko showed up to meet her cousin in a Carnival, and soon Karsano (Dragonfly I) shows up with a pack of ninja to make the second attempt on her life. Thanks to Spider-Man's interference, he fails. Later, at Angela's appartment, Meiko reveals that Karsano was her ex-fiancee. They trained and perfected martial arts together. When he joined the True Believers, he was given the top ninja rank, Dragonfly. He became distant, and Madam Qwa, the cult's leader, ordered him to kill her. This is the soft version she tells her cousin (and that Spidey overhears). She forgets to mention that she joined the True Believers too, and that if he and his ninja fail, she becomes the next Dragonfly.

According to the TB code of honor, he has only one more try to kill Meiko. He shows up right after she finishes her story. Once again Spidey interferes. Once again, Karsano fails. He commits ritual suicide, and Meiko goes to meet Madam Qwa, where she's confirmed as the new Dragonfly.

It turns out that the TB are working for Black Tarantula, and the Black Tarantula wants Joe "Robbie" Robertson dead with "evidence" that incriminates Rose III. Dragonfly II is assigned for the kill. Meanwhile, the Rose has re-empowered Electro, and sends him out to take care of Black Tarantula's ninja who are hurting his business. Spidey follows Meiko, Electro follows the news of ninja sightings, and it comes to a big brawl. Spidey takes out the ninja, Electro takes out Dragonfly, some more ninja, and Spider-Man, and Joe Robertson pulls Meiko to safety. Honor-bound, she can no longer kill him now that he saved her life. He takes advantage of that to confirm some info on the Black Tarantula. Electro leaves, after making Spidey beg for his life. Meiko leaves, after Joe lets her.

The Hand came to NY after their mortal enemies, the True Believers ("freaks who diverted from The Hand's path"). Elektra came to NY after The Hand. Madam Qwa and Yano (another ninja servant) berate Meiko for her failure. Yano wants her head, but Qwa decides to give her a second chance. She must prove her loyalty, by killing her cousin. Meiko stops short from stabbing her cousin's back, and leaves. Yano, who was following her, prepares for the kill. She says he's entitled to it, but he says that after that, he'll kill her cousin anyway. Spidey and Elektra arrive. They and Meiko take out Yano and his ninja, thus Meiko wins back her cousin's life. Elektra advises Meiko on how to remain in the path of good, and they both leave. Dragonfly has not been seen since.