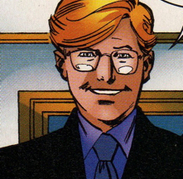 Donald Menken is a loyal employee and personal confidante of Norman Osborn.

Menken worked his way up the ranks at Osborn Industries where he blindly followed Osborn's directives. One of his earliest tasks was to shut down the laboratories of David Patrick Lowell, an employee of the Osborn Chemical Company. Lowell was working on a formula that was structurally similar to the Goblin Formula, so Norman wanted that project terminated. Soon after Menken disposed of Lowell's chemicals and notes, Lowell became the villain Sundown. Years later when Lowell was released from prison, he was approached by Menken who offered him aid in getting back on his feet. Lowell refused Menken's help as he recalled Menken's role in the destruction of his research.

After Norman Osborn 'died' that fateful day at the Brooklyn Bridge, Menken rose further up the ranks becoming an executive at Osborn Industries. Due to Menken's level of loyalty to Osborn, it is likely that he was aware that Norman was not really dead, rather in exile in Europe. When the Hobgoblin first broke out on to the scene raiding Norman's warehouses, it was Menken that kept Harry Osborn informed regarding these robberies. When Harry was on the board of directors for Osborn Manufacturing, Menken continued support Harry providing him with various forms of information.

Menken remained an executive at Osborn Industries for a long time and he was still running the show when Roderick Kingsley was outed as the Hobgoblin. Menken and Kingsley conspired to setup a phoney corporate buy-out between Osborn Industries and Kingsley International. But after Kingsley was busted and their deal went south, Menken publicly denied the allegations that he was involved in any nefarious business transactions with Kingsley.

After the Gathering of Five ritual that cost Norman Osborn his sanity, Menken (along with a few other Osborn loyalists) broke Norman out of Bellevue. Menken then helped Norman form the Order of the Goblin and served as Osborn's right-hand-man within the new cult. Menken also secured the help of Dr. Albert Bendix, who was able to restore Norman's sanity by developing dermal medication patch. While recuperating, Norman had fallen in love with his nurse Kolina Frederickson. Menken advised against this and after Norman nearly killed her, Menken stepped in to finish the job. But Norman would not stand for that and he grew incredibly protective over Kolina. When Menken pointed a gun at her and threatened to kill her, Norman attacked Menken and broke his arm. Kolina quickly stepped in placing a dermal patch on Norman, which calmed him down and prevented him from strangling Menken to death. Menken was last seen being sent to Norman's Adirondack estate to stay for an indeterminate period of time.