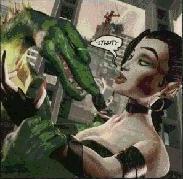 Yith is a mercenary, with half-human half-snake body. Her first appearence was in the mini-series Spider-Man: Quality of Life, where she was hired by Cliff Arliss, the head of Monnano, a company that thrives on genetically altered food, but whose chemical dumps on a river had caused cancer on Martha and Billy Connors, wife and son of the Lizard, Curt Connors. Her task was to kill Connors before he became a nuisance, either by taking things to court or by having his alter-ego wreaking havoc in the building.

After a couple of entanglements between Yith, Spider-Man and the Lizard, Curt has to deal with both the recovery of his son and the loss of his wife. Yith, who had only been concerned about her paycheck up until now, feels for Curt's pain. In the end, Spider-Man soothes a raging and grieving Lizard, and Yith's constant delay in doing her job is explained, when out of sympathy for Curt she kills Arliss' instead, saying she's never been in love.

For reviews of all four issues, check out the Spider-Man: Quality of Life title index.