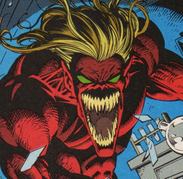 An obscure character from years ago in Norman Osborn's past, Nels Van Adder provided an important step in his journey towards becoming the Green Goblin. Shortly after Osborn had Mendel Stromm framed for embezzlement, Norman attempted to create a super soldier formula of his own. He wasnt having much luck and realized that he needed Stromm's notes on the formula he had been working on in order to be successful.

In the meantime, Osborn had used one of his own, failed serums on an OsCorp researcher, Dr Nels Van Adder. Van Adder had volunteered to be a test subject to the prototype serum, knowing that there was no "stabilizing reagent." The formula turned his body red, his eyes green, elongated his teeth, increased his strength and gave him bullet proof skin. This was more than what Dr Van Adder had bargained for and he confronted Osborn on the matter.

This was also around the time that Arthur Stacy had been made OsCorp's Head of Security. After a strange, red creature had tried to break into OsCorp and injured some NYPD officers, Arthur found the work badge of Nels Van Adder, identifying him as an employee. The badge seemed to have been left by the creature. Arthur later asked Norman about Van Adder, who brushed his Head of Security aside. Later that night, a seemingly random gang related drive by shooting hit the Stacy home, nearly injuring Arthur and his wife.

Already suspicious of Norman Osborn, the drive by gave Arthur all of the evidence he needed. His security card had been revoked at OsCorp and he broke in. He was confronted by his older brother, George Stacy, who knew his hot headed younger brother would over react and blame Norman for the drive by. It was then that they heard Osborn being attacked by Van Adder.

While their bullets didnt do much against the Proto-Goblin, Arthur did manage to knock the mutated scientist out of Norman's office window with a football tackle that they used as kids "in old man Gallagher's lot." George broke his leg in the fight, giving him the injury that necessitated his use of a cane for rest of his life. After the creature escaped, Norman explained to the police that Dr Van Adder had been an assistant to Dr Stromm and had experimented with Stromm's biotechnology. Osborn may have cleared himself in the eyes of the police, but not with Arthur Stacy, who quit as his Head of Security. It was a small price to pay for Osborn, who found the missing notes to the Goblin Formula in Stromm's desk, which had been smashed in the melee.