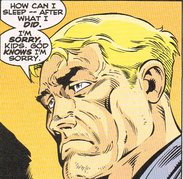 Harrison Thompson was exactly the type of father that young Eugene "Flash" Thompson needed to become the bullying, womanizing blowhard that grew up to be. A violent drunk, Harrison would spend much of his time in various taverns, even when he needed to report for duty at the police station. His wife and children lived in terror of his temper, practically holding their breath as they helped him get dressed for work after he came home from the bars. Yet they couldn't totally hate him, as he always apologized profusely after striking out at them with his fist or his words.

With all of that anger and resentment inside him, Flash took it out on the neighborhood kids. A natural athlete, Flash dominated the other kids, both in terms of talent and through intimidation. When one boy told him that they didn't want to play with him any more, Flash beat him up until he ran home. He also stole from the local comic book store, making the store owner call Harrison at the police station. Harrison was waiting for Flash when he got home and when he accused his son of trying to "disgrace the Thompson name" Flash told his father that he had done that already. That earned Flash a nasty beating. Harrison apologized later, asking Flash if he still loved his old man. Eugene muttered his uncommitted agreement. (Spectacular Spider-Man -1)

Harrison also coached his son in football in the fifth grade. He was a tough coach, being especially hard on Eugene, to show the other parents that there was no favoritism on the team. Flash could take the harsh words and lack of support better than he could the beatings at home, such as when his father punched him for getting a speeding ticket in high school. Flash continued his bullying as a teenager, loving the approval he got from the other students. "Kids love to watch a bully work some poor geek," he remembered.

Later in life, Flash started drinking. Peter first noticed his friends new habit and expressed concern. Flash told him to buzz off. He felt that his life was going nowhere and that even "puny Parker" had gotten further in life than he had. (Spectacular Spider-Man #242)

Flash tried to reconnect with Betty Brant after she found him drunk in his apartment but she wasn't willing to get too close to him. He found some girl in a bar later and took her home to "show her his trophies." (Spectacular Spider-Man #243)

Flash had been thinking about his father and went back to Queens to visit his parents. His mother was delighted to see him after so many years but his father accused him of only coming to see if he was dead. Flash could only say "I hope you die soon" as he walked out the door. His mother begged him to not leave, as Harrison was in poor health. (Spectacular Spider-Man #248)

Flash met his younger sister, Jessie, at a basketball court later. He wanted to talk about their father and she refused to dredge it all up. She could tell he had been drinking and said he needed to straighten up and go to AA. She had done that very thing years ago. Flash refused to think that he was an alcoholic. Flash was soon involved in a drunk driving accident, nearly hitting a young boy walking his dog. He swerved at the last minute and hit a tree. (Spectacular Spider-Man #249)

When Jessie met Flash at the hospital, he told her not to worry, it was just an accident. She reminded him that Harrison had a few accidents too. A police officer then arrested Flash. After he was bailed out, Flash went back to his apartment and saw what a mess it was. He saw it as a good metaphor for his life. In a rage, he went to confront his father. He took out his rage on the old man and quickly realized he was doing the same thing that his father has always done. (Spectacular Spider-Man #250)

"Son of the Hunter"

Flash later went to talk to Betty and told her that he was taking responsibility for his life and actions and was checking into a treatment program. (Spectacular Spider-Man #251)

Its assumed that Flash stayed away from his parents for the next few years. When he did finally see his father again, Flash had lost his legs in Iraq and was secretly working with the U.S. government as Agent Venom. His mother had told Flash that Harrison had stopped drinking for about two years and she asked him to come back to them and put the past behind him. Flash grudgingly agreed but promised that if Harrison started drinking again, he would be dead to him forever. His mother called him, saying that she hadn't seen Harrison for a few days but that he had been drinking again. Out of sympathy for his mother, Flash went looking for his dad at the local bars, with help from Peter. Flash demanded that Harrison come home and his dad derided him for being a weak cripple that couldn't make good on his threat. Flash could never beat him when he had legs, so how could he do it now? Harrison fell to the floor after he took a swing at Flash and ended up in the hospital. The doctors told the family that Harrison had cirrhosis of the liver and that he had known about it for a year. He just hadn't told anyone. Eugene left his father in the hospital, refusing to have anything else to do with him. (Venom (vol. 2) #5)

While his father lay dying in the hospital, Flash was forced to deal with the chaos caused by the Jackal and the Queen, whom had made the people of Manhattan mutate into man spiders. Agent Venom apprehended Anti-Venom (who had been curing people that were afflicted by the mutations) and turned him over to Reed Richards to find a cure that could be mass produced. Flash returned to his father's side, despite his apprehension of being near him because of their long history. Harrison apologized for being a lousy father and Flash promised to remember the good times they had, listening to the radio. Despite it all, Harrison was the only father that Flash had and he wouldn't trade him for anything. Harrison then passed away. (Venom (vol.2) #7)

Harrison didn't get any peace, even in death. Jack O'Lantern VI exhumed his body from the grave and carved his skull to look like a jack o'lantern to taunt Agent Venom. His body was then blown up with a bomb. The heat and noise of the explosion was meant to disorient the symbiote and allow Jack O'Lantern to get an advantage over Thompson. (Venom (vol. 2) #22)