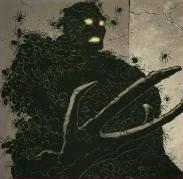 The third supernatural threat to come after Ezekiel, after Morlun and Shathra, the Gatekeeper is he who controls the power. Ezekiel tried to talk Peter Parker into fleeing with him to South America as part of his plan, but Peter refused and fought the Gatekeeper on his own, because a sea of spiders was invading Manhattan and attacking people in order to draw Peter out. Peter was captured by the Gatekeeper, and the creature told him that it wasn't after him, and revealed to him Ezekiel's true motives. After that, Peter woke up in Peru, in Ezekiel's grasp. How that happened is unclear. Surely the Gatekeeper would have tried to kill Ezekiel if he got near him. Oh, well...