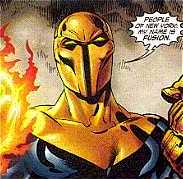 Well, this guy has nothing to do with the other Fusion. You don't believe it? Check it out. They couldn't be more distinct, so I'll avoid the Fusion II designation.

When he was a child, Markley discovered he had the mutant ability to persuade. He could talk everyone into doing what he wanted, so as he grew older, he made millions with his powers. He honed his powers and used his money and influence to develop systems to enhance them. So, he became a "more-than perfect killing machine". Or just a guy with a big mouth...

Jeremy Markley, Fusion's 9-year-old son, to whom he gently refers as "My Francis" (how sweet), was a timid boy, who loved Spider-Man, and wanted to be like him. So, he climbed to a warehouse's roof, and jumped with a rope on his hands, expecting to swing. Unfortunately, things don't work out that way, and poor little Jeremy didn't survive the fall. His father, being used to getting everything he wanted, faced a first: He couldn't get his son back. So, typically, he blamed it on Spider-Man.

In his first appearance, Peter Parker: Spider-Man (Vol. 2) #30, Fusion was depicted as an awesome, near-omnipotent character. He faced Spidey on a rooftop, and he attacked with the powers of the Hulk, the Thing, Mr. Fantastic, Thor, and many others. He could just copy them all. He also made all the guns in the cops' hands explode, killing them, and caused the crash of a police helicopter. Then he threw a mannequin from the top of the building, and Spidey mistook it for a real woman, and tried to web it. The mannequin was wired, and it exploded against the side of the building, killing 300 people...

They meet again, to end the story-arc, in two following issues. The battle takes place at the spot where Jeremy died, and with his nearly endless powers, Fusion beats the crap out of Spidey, breaking his neck in the process. Fusion drags him to his hideout, and there, he leaves him helpless on the floor, while he watches his agony and despair. Of course, as all of the readers know, and no super-villain seems to learn, if you have Spider-Man knocked-out, you should kill him right away. But villains tend to gloat over their petty need to feel superior, and, of course, if they did that, we'd have no comics to read. After spending half of Peter Parker: Spider-Man (Vol. 2) #32 lying on the floor, being tortured by Fusion, trying to find out what is wrong, and persuading himself not to give up, he finally manages to move his hand. Realising the true nature of Fusion's powers, he stands up, and faces his opponent. "You're just a poor man's Mysterio, an' I just figured you out." A surprised Fusion then tells the story of his powers to Spidey, and tells him that the officers that died during their first fight, didn't die because their guns exploded, they were persuaded to commit suicide. He says that even if Spidey knows what's happening, he can't block Fusion's powers. This is proved wrong, and Fusion is forced to explode his small wand, which makes the warehouse collapse. Spidey chases him to the street, where we witness an impressive scene: the "Hulk" punches Spidey in the stomach, and Spidey doesn't move an inch. We have to go back 12 years, to find a fight where Spider-Man took the best out of the Hulk (Acts of Vengeance). Of course that this wasn't the real Hulk, but it's a nice picture nonetheless. Spidey captures Fusion, but he makes some cars crash, so that the Web-Head loses him. Spidey saves the people, and Markley flees.

Fusion returned in Peter Parker: Spider-Man (Vol. 2) #39. Lots of fans were worried about this, because this story showed Doctor Octopus, a classic Spider-Man villain, acting like a pansy under Fusion's command. People thought this shouldn't be, that Jenkins was overbuilding a character of his creation, and humiliating a major baddie like Octopus. Of course, if you can't judge a book by it's cover, you can't judge a 3-part story arc for the first issue. Fusion found Doc Ock working in one of his facilities under an assumed name, and he enslaved him. Octopus was apparently convinced that Fusion's "powers" were real. Fusion's plan was complex, and it involved the company BioTechnix. They would cause incidents that made people lose an arm, and then they'd replace it with an all new, very advanced prosthetic arm. All of the people were high-placed in the military, or in the espionage community, and there was also a Senator, Bradley Miles. All of these prototype limbs had a processor that sent/recieved information to the brain, and also a radio transmitter/reciever. In English, these arms allowed Fusion to control the minds of their users. Fusion wanted to control all of those people, to find out the whereabouts of the device known as John Hancock. Hulk readers might recognize this name from somewhere: General Ryker used it to track down the Hulk long ago. It could follow an individual based on their personal radiation signature. Phew. Plot explaining is over. Fusion wanted the device to track down Spider-Man, who has an unique radiation signature. But so wanted Doc Ock...

Spidey found both of them at a BioTechnix factory. He escaped with a prosthetic limb and a suitcase, that gave him some clues. After speaking to some sources, he returns to the factory, where an amputee just brought the John Hancock device to Fusion. After Fusion tells Ock that the amputee is the only witness to the whole affair, Ock wastes him. Fusion is enraged that Octopus killed the guy without his order, but he soon realises that that was his smallest problem. Octopus was playing him for a fool, to get the device. Fusion's powers have no effect on him. He beats Fusion up, and leaves him hanging from the ceiling, near-death, covered in octopus ink, and with 4 prosthetic limbs stuck to his torso. That's how Spidey finds him. He calls an ambulance, and that concludes Fusion's participation in that story. The final issue pits Spidey versus Ock in grand style. Guess who won?