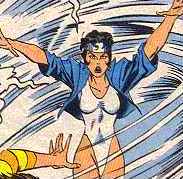 Bora grew up in Russia, where she trained to become a ballerina. However, her sudden growth spurt during adolescence put a rapid halt to that career. Resentful that others who maintained their abilities would take them away from her native russia, she sought to assassinate russian dancers who had left their native country and relocated to the USA. She managed to slay several of them before she was defeated by Moon Knight with a major assist from the Fantastic Four and several members of the X-Men. Even with their aid, they were forced to use blinding lights and deafening noise to weaken her mental control of her abilities.

It's not clear whether she met the Painter or Spark first, but she became close enough to him to refer to him as beloved. The Painter performed a mystic ritual which joined their three spirits, as the Avant Guard, to grant the other two additional power, in turn for inspiration for himself, from them. Bora first assisted Spark in his performance art, but then focused her powers at creating a blizzard over the entire city of Manhattan. Alongside Spark, she confronted Spider-Man, and defeated him by coating him with inches of ice.

Spider-Man recovered and, accompanied by the Human Torch, confronted the Guard in their headquarters. The two overcame Bora and Spark, but the Painter revived them with a wave of his brush. However, when the fighting renewed, the Painter lost interest in the venture and trapped Bora and Spark as fixed images on his canvas, before apparently exploding himself, as outlined in the Art Attack storyline.