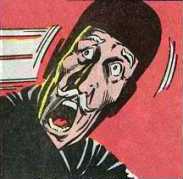 The Black Fox is a cat burglar of the old school who, for thirty years, made a living and developed a legendary reputation for himself. Now in his sixties, he yearns to pull off one last big heist so that he can retire for good to the French Riviera. It is, unfortunately, at this time that he starts to run into super-beings. He first encounters the Red Ghost, who is so afraid of Spider-Man and others that he needs a replacement to lead his super-apes on a robbery. From there, in quick succession, the Fox runs afoul of Spider-Man, Silver Sable, Black Cat, Chance, the Prowler, and Dr. Doom.

In each situation, the Fox is way over his head. Having no fighting skills to speak of, the Fox is always ready to surrender but has been rescued by Spider-Man time and time again, only to convince Spidey to let him go. His sob stories about his poor wife and children or his poor deceased mother are effective but invariably fabrications. In each instance, Spider-Man ends up feeling like a dupe. However, in their last encounter, the Fox made the mistake of assuming he could pull off the same trick. This time, Spider-Man carted the Black Fox off to jail.