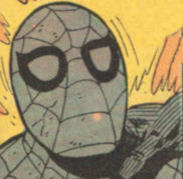 Perhaps the simplest of all Spider-Man's "transformations".

In Marvel Team-Up (Vol. 1) #13, Spider-Man and Captain America battle the Grey Gargoyle. It's all to do with helping S.H.I.E.L.D. prevent the theft a "guided missile telemetry system". I'll spare you the details, it's a turgid story at best.

Suffice to say that two pages before the end of the one-shot comic, Spider-Man and Captain America are both transmuted into stone by the Grey Gargoyle's petrifying touch.

Now, as I'm sure you're aware, this effect will normally incapacitate the victim for one full hour – plenty of time for the Grey Gargoyle to strap the two heroes to the rocket which is about to...

...launch a satellite whose power-beam is capable of turning entire cities to lifeless stone!

But in the very next page, the freshly-frozen heroes prematurely revert back to flesh-and-bone and overpower the surprised Gargoyle. And instead it is the Gargoyle who is hoist by his own rockety-petard and returned to space (from whence he had so recently managed to return via a convoluted series of events as tediously described earlier in the same comic).

What is the explanation given for the heroes premature rapid restoration? Well, in the case of Captain America, the cause is postulated to be related to a venom injection he received from Viper.

As for Spider-Man? No rationale is provided at all. I presume that writer Len Wein intended to give a good reason, but either he ran out of time, or he ran out of space in the overly wordy closing page.

Whatever the reason for the lack of reason, the whole thing is a massive anti-climax.