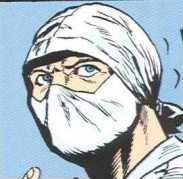 Unknown. He was described as "some kind of mutant."The White Ninja was hired by the Baroness to steal the Cassidy Crystals to further her plans to takeover the world. He successfully stole the Crystals, taking out Silver Sable and her Wild Pack, who had tried to stop him. Sable recruited Spider-Man to help her prevent the Baroness from using the Crystals. The two journeyed to the Baroness's base in Bavaria. While Spider-Man occupied the guards and the White Ninja, Sable broke into the castle and confronted the Baroness.

Spider-Man's speed and spider-sense enabled him to keep pace with the White Ninja, until he exposed Spider-Man to the Cassidy Crystals. Spider-Man was instantly overwhelmed with horrific images, which the White Ninja used to his advantage, battering the confused web-slinger. However, eventually Spider-Man became furious and fought off the effects of the Crystals. He succeeded in striking a powerful blow to the White Ninja that disrupted his invisibility field. Despite this, the battle continued as a stalemate, and the ninja again tried to use the Cassidy Crystals. Spider-Man was prepared and leapt away in time, the wind blowing the fumes into the ninjas face. The hallucinations and fear caused the White Ninja to lose his balance, and he fell into a deep, deep crevasse.

Note: The White Ninja I is no relation to: White Ninja II, an alias briefly used by Abe Brown, to teach his brother, the Prowler, a lesson, @ Spectacular Spider-Man Annual#10/2