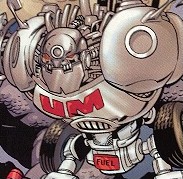 Somehow Hammerhead started a gang-war that involved the Jamaican, Polish, Italian, Chinese, Colombian, Korean, French and Japanese Mafias in an amusing B- plot in Peter Parker: Spider-Man #50, volume 2. I'm pretty sure Hammerhead's goons were the Italians.

Anyway, The Polish hired the Rhino and Uber-Machine to do their bidding. Ubie is a murdeous psycho in a huge armor suit who has no qualms about killing. 4 panels after his 1st appearence, Spidey drives him and the Rhino against each other, knocking them both down for the count. At last, one guy in an armored suit who wasn't supposed to be taken seriously.

It's over already. The guy got creamed. His armor was wasted. He's in the slammer. Oh, and Hammerhead planned it all so that Spidey could take out a few rival gangs and all the members of his organization that were causing him trouble. Typical Parker luck.