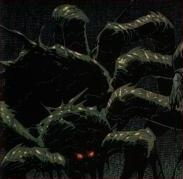 When Ezekiel captured Peter Parker, he bled him to summon "the powers", and left. The giant spider, who had given Zeke his powers in the first place, came to devour the pretender, and found a weakened Spider-Man in his stead. But Ezekiel had an epiphany and turned back, attacking the spider and dying in the process. Having killed its original target, the spider left, leaving Peter unharmed.