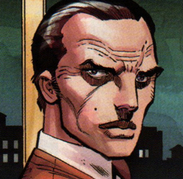 Randall Crowne, CEO of Crowne Industries, was one of two candidates for NYC mayor, his opponent was councilwoman Lisa Parfrey. During a debate between the two candidates, Menace arrived and abducted Parfrey. Although Spidey and Jackpot attempted to rescue her, Parfrey was killed when Menace's Goblin-glider impaled her. Crowne's mayoral opposition was then filled by District Attorney Bill Hollister.

Later, at a Randall Crowne campaign event, the monstrous Freak arrived wreaking havoc in search of Spider-Man. Crowne was nearly killed during the melee, but Spidey was able to save the candidate, a deed for which Crowne did not show much appreciation.

Crowne was endorsed by the DB! editor/publisher Dexter Bennett, which allowed him to control the media to a certain extent. Despite having Bennett's backing, Crowne sought further endorsements. He was very disappointed when he found out that Martin Li, a billionaire philanthropist, was backing his opponent Hollister. Concerned that Li could not be bought, Crowne decided to add Li's name to the 'list'.

When Menace attacked a Hollister campaign truck, the explosion destroyed the side of a building and exposed a Crowne Industries run sweatshop, creating a PR nightmare. In order to regain public support, Crowne sought help from his 'old friend' Norman Osborn and his Thunderbolts team. Crowne requested that Osborn track down the Spider-Tracer killer and in return he would pull some political strings to give Osborn's team free reign to track down Spider-Man. The mayoral candidate also requested Osborn's public support as mayor, and after Osborn backed Crowne, the Crowne Foundation awarded Osborn the Man of the Year award. However, Norman was unsuccessful in catching both Spider-Man and the Spider-Tracer killer much to the dismay of Crowne. Even worse, Harry Osborn ended up handing evidence over to Ben Urich exposing Crowne Industries and Oscorp for human trafficking. Betty Brant decided to pursue this story as well, but Bennett told her to bury the story. Urich was unable to expose Crowne and Osborn because the evidence he needed was destroyed in an Oscorp plant during a battle between Spider-Man, Anti-Venom, the Green Goblin, and the Thunderbolts. The destruction of the necessary concrete evidence allowed Osborn and Crowne to remain legit in the eyes of the public, all the while the duo assured everyone that the Spider-Tracer killings were over. Crowne even went as far as to stake his reputation on the Spider-Tracer killer case being closed.

But the killings did not stop and Crowne continued to drop in the polls. When the election day finally arrived, Hollister defeated Crowne but was immediately removed from office when it was publicly revealed that his daughter was the villain Menace. The last minute revelation won Crowne some support, but he still lost the race by a small margin. Crowne decided not to run in the special election that followed. J. Jonah Jameson won that election and became the mayor of NYC.