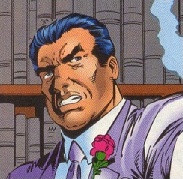 After the defeat of the Big Man and before the rise of the Kingpin, the New York mobs are fragmented, under the commands of various leaders. One of these leaders is Lucky Lobo. It is not clear how big Lucky's mob machine is but it is certainly powerful enough to attract the interest of Norman Osborn.

Osborn first approaches Lucky Lobo through his agent known as the Headsman, a hooded super-villain who uses prototypes of Osborn's eventual Green Goblin equipment. Osborn tries to impress Lucky Lobo by having the Headsman kill Spider-Man. When he thinks he succeeds, the Headsman goes and reports Spidey's death to Lobo. Lucky is so pleased to hear this news that he begins to propose a reorganization of the city's mobs with the Headsman in a prominent position of authority. But before the proposal can be made, word comes to Lucky that Spider-Man is still alive. The furious Headsman cuts Lucky's desk in half with his executioner's axe and smashes through his window vowing to take Spider- Man's head but Lucky is not impressed. In fact, the Headsman's failure taints his benefactor as well. When Osborn, in his Green Goblin garb, approaches Lucky to propose an alliance, he is treated "like a supplicant". The Goblin gets revenge on his ineffectual lackey by defeating the Headsman and leaving him for the police.

When the Goblin appears again, he is no longer proposing an alliance. He tells Lucky that he is going to take over the whole mob. At first the Goblin suggests a peaceful takeover but Lucky resists ("You must be nuts, Goblin!" he says.) so Osborn decides to take Lucky's gang from him by other means. He gets one of Lucky's men to betray him by turning over a list of Lucky's unreported income. The Goblin uses his stoolies to pass the list of secret finances along until they end up in the hands of Bugle reporter Frederick Foswell, who was once the mob leader known as the Big Man. Foswell brings the list to J. Jonah Jameson who takes it to the police. The cops start raiding Lucky's secret establishments while the Green Goblin secretly pitches in to make sure Lucky's men cannot escape. When Spider-Man enters the scene, the Green Goblin leads him to Lucky's offices, setting up a battle between the web-slinger and the members of the mob. When Spidey defeats his entire gang, Lucky proposes that he and the wall-crawler team up against the Goblin. Instead, Spider-Man leaves Lucky webbed up and waiting for the police. The Goblin thinks that he can step in and take over until he discovers that the police have arrested the entire Lucky Lobo gang. There is no longer an organization to take over.

While in prison, Lucky meets David Lowell, a former Osborn employee who became the super-being known as Sundown. Lobo tries to befriend Lowell but doesn't get very far. Still, after Lucky makes parole, he keeps tabs on Sundown. When Lowell is released from prison, Lucky is determined to get him on his team and to use him to regain control of the New York mobs. Lobo forces Sundown to join him by threatening the life of Lowell's former neighbor Mary Kelleher (whom Sundown accidentally crippled years before). All seems to go as planned until Sundown double-crosses Lucky, with Spider-Man's help, sending the mob boss back to jail.