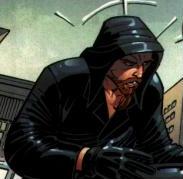 Killshot was just another client of Leo Zelinsky, a tailor for the super (or not) heroes and villains. When Zelinsky heard him on the phone, planning the murder of District Attorney Sam Whitehall. Zelinsky alerted Spider-Man, who stopped the hit. Killshot endangered a civilian to distract Spider-Man, and went directly to Zelinsky's shop, for revenge. Spider-Man followed him, and Killshot ended up in a web-bag.