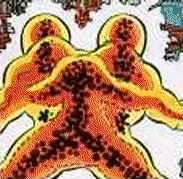 Hubert and Pinky Fusser were identical twins, born with dwarfism. Hubert became a physicist and built a device in Newark, New Jersey, that allowed him to create a subatomic particle accelerator that created new elements. He briefly pondered doing a safety check on the machine but then decided that nothing was likely to happen. Pinky, a janitor at the facility, reminded him to be careful, a warning which Hubert disregarded. As soon as he tested it, the machine let forth a bombardment of particles that knocked Hubert to the ground. Pinky arrived and tried to save his brother, but the energy melted his skin. He tried to pull his brother away and their bodies merged into one.

The merged brothers ran afoul of Spider-Man at a hospital, where Peter Parker and his Aunt May had been visiting Anna Watson. Peter heard screams, changed to Spider-Man and found Fusion standing over an unconscious nurse. Spidey webbed the nurse and pulled her away and the creature jumped out a window to escape. Spider-Man was amazed to see that the glowing entity had survived the 6 story fall and seemed to have grown in height. The wall crawler swooped down and tried to knock the creature down, but bounced right off it. Fusion walked away, Pinky wanting to go home and Hubert wanting to experiment.

They separated in the subway, with Hubert stunned that they had gained the power to absorb energy from a car they touched and from the fall out of the hospital. Pinky tried to leave but suddenly the brother collapsed, with Hubert falling onto the subway tracks. Pinky managed to grab him and they became Fusion just before a subway train hit them. They absorbed the force of the impact and became stronger. Hubert forced them to leave and try and absorb the electricity of the tracks to gain even more power.

Spider-Man heard from some cops that the Upper West side had a blackout and he suspected Fusion to be behind it. He found Fusion at the George Washington Bridge, absorbing power from car in gridlock. Spidey tried webbing up the glowing thing, but Fusion just absorbed the energy of the chemical reactions in the webbing, causing it to disintegrate. Fusion released a small amount of energy and again sent Spider-Man reeling backward. Fusion then told Spidey that he was heading to the Indian Point nuclear power station to absorb it's energy. Spider-Man was then knocked away again, as Pinky told Hubert that he was only doing this for himself. Hubert argued that he was doing this for science.

Spidey noticed that the creature was arguing with itself and made a note of that as he tore loose a cable from the bridge and used it to lasso Fusion. He pulled the tiny menace off the bridge and down into the river, hoping that it would stun him. Hubert countered by stamping on the water as he hit it to create a reaction that allowed them to keep from sinking. They then walked on the water to the shore. Spidey asked the reasonable voice to help him and Pinky began to separate himself from Hubert. Spider-Man helped by pulling them apart and the separation caused them to lose power and revert back to their normal selves. They collapsed unconscious and Spidey took them to a doctor, doubting that they could get the treatment that they needed.